This year’s Czech Lion film awards were dominated by A Prominent Patient, which picked up a record 12 gongs for its depiction of politician Jan Masaryk at a low ebb in the wake of the Munich crisis. Other winners included Wasteland, one of the most ambitious Czech TV series ever made. 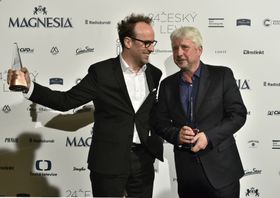 Julius Ševčík, producent Rudolf Biermann, photo: CTK The top Best Film prize at Saturday’s Czech Lion awards went to A Prominent Patient. Indeed, it was a great night for its makers, who picked up a record 12 awards.

The picture envisions Czech politician Jan Masaryk at a low point, between the signing of the Munich Agreement and the outbreak of WWII.

After picking up his Best Director gong, Julius Ševčík explained what had drawn him to the subject.

“It was the fascinating character of Jan Masaryk, first and foremost. Secondly, I loved the idea of making a movie about a historical figure in a historically important time. Not to do a classic historic biopic which attempts to capture all events in the person’s life, but to focus on a certain very, very complicated period.”

Did it feel like a certain responsibility given that he was a real person to, if not get the story right, represent him to some degree?

“Right. It’s always a responsibility, especially in a country this small, because you always bump into somebody who knew him or who knew somebody who knew him. So they all have their own idea of who he was. You have to kind of break those myths in order to get somewhere in terms of a truthful biopic.” 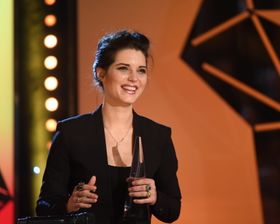 Michalina Olszanská, photo: CTK Among the other pictures to win at the Czech Lions was I, Olga Hepnarová, an exploration of the eponymous 1970s mass killer. Its Polish lead Michalina Olszanská received the Best Actress prize.

“When I read the script, I felt this was a story that must be told and I wanted to tell this story. Of course I was a young actress, and still it’s not like I can pick whatever I want, but I wanted to tell that particular story even more than any other film. Because I just felt that maybe Olga wants it.”

One of the most ambitious projects of its kind ever produced in the Czech Republic, HBO’s Pustina, or Wasteland, was deemed Best Dramatic Television Series. The atmospheric crime drama’s lead director Ivan Zachariáš is known internationally as a top ad maker.

“From the very first page I was able to imagine how I’m going to do it, which is quite rare, to be honest. Because I got offered quite a lot of projects where I thought, Oh God, this is not going to happen – it’s not for me.”

So what was different about Pustina?

“It was real and I wanted to make it as a real story of real people and not a fake… something, which actually TV is full of.” 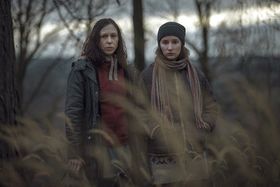 'Pustina', photo: HBO The Best Documentary award at the Czech Lions was claimed by Normal Autistic Film. Miroslav Janek’s doc turns the spotlight on young people with Asperger syndrome who are all gifted in various ways.

“I found them very inspiring. I found them interesting and creative minds. These kids are very busy with special activities. They don’t just sit in front of the computer playing stupid games, etc. So I think that’s a good thing that there are more and more autistic people in the world. And maybe one day there will be more autistic people than so-called normal people, and the world will change.”