For years, Czech left-handers have been grappling with ill-designed pens and pencils, vegetable peelers, scissors and secateurs. But they need not any longer. The country’s first shop especially for left-handers has opened in Prague. I paid it a visit.

Prague’s first left-handed shop can be found in the former industrial region of Karlín. Vilém Nacher helps run the store:

“The most popular products here are scissors, as well as pens and pencils. And things for children sell well.”

You’ve got some pictures up on the wall here – a photo gallery – can you tell me who’s there and why?

“Well, all of these people are left-handers. And we can see here, for example, ex-president Bill Clinton, the tennis-player Rafael Nadal, Albert Einstein and Leonardo da Vinci.”

And any famous Czech left-handers?

I was accompanied on my visit to Obchod pro levoruké (“The left-hander’s shop”) by Martin Dušek, one of the Czech Republic’s one million or so left-handers. I asked him how often he found himself wielding something clearly designed for right-handers, and whether this was a pain:

Martin: “I’m a film maker, and from time to time I hold a camera, and this is the biggest and most uncomfortable item that I use, because it is only designed for right-handed people. So it is really difficult for me to handle a camera properly, and I think that this is why I never became an actual cameraman, even though I tried.”

And there’s no chance of you selling a left-handed camera here?

Vilém: “Unfortunately not. We tried, but it was so expensive, so very expensive, that we gave up.”

So what else do we have here that Martin can try out and comment upon – some scissors maybe? 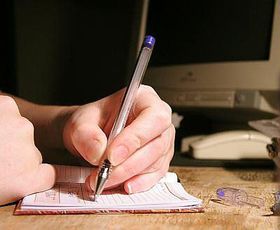 Martin: “I had my first left-handed paper scissors already under communism, my father bought me some, and I was quite surprised when I found out that they were already produced here under communism.”

But then Mr Nacher pulls out a pair of left-handed manicure scissors, which seem to be quite a hit with our tester:

Martin: “When you, as a left-handed person, use right-handed scissors, you have to look over your hand – and having left-handed manicure scissors is really good, because the work has to be very delicate and tiny. So this is really helpful.”

So Martin, are you someone who often has manicures, will this really help with your handcare routine?

Martin: “Yeah, sure. I think I’ll buy some. But, you know the problem – this won’t in fact help me all that much – because you have to cut the nails on your left hand also using… your right hand.”

Vilém: “Yes, absolutely – you need two pairs of scissors – and we stock a set of manicure scissors for both the left and right hand.”

In the end, though, we left the shop having only bought a pen. Still, the collection of corkscrews which turned in the opposite direction, and rulers which were numbered back to front, was impressive – even if they left a right-hander like me all fingers and thumbs.

A priest tells his parishioners: sorry, I've fallen in love. Czechs are playing a crazy new sport -woodkopf. And, clearing the way… 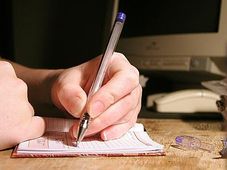 Around 10 percent of people are left-handed. But it wasn't so long ago that those born left-handed were forced to write with their…