A year to look forward to in Czech sport: from Olympic hockey to the football World Cup

Without question 2006 is a year to look forward to in Czech sport: from Olympic hockey to the football World Cup. Both tournaments are taking place just around the corner, in Italy and Germany, so a lot of Czechs will be on the move, both fans - and reporters. Jan Velinger spoke to Jan Palicka, a senior writer for Mlada Fronta Dnes, and asked him how he saw Czech prospects this year:

"Last year was great but this year Czech sport can be even better. There are at least two major events to look forward to: namely, the Winter Olympics in Turin, Italy, and the football World Cup in Germany in the summer. It's good. It will be important for all fans of Czech sport."

Olympic hockey will of course be one of the major areas of interest: do you think the Czech team, as it stands now, will be able to build on its success from last year - that is World Championship gold in Vienna?

"Czech ice hockey has a great national team - one of the favourites - along with Sweden, the USA, Canada, so I think they should do well. They have a great team, and they have Jaromir Jagr who is superman!"

Who do you put "between the pipes" when you have both Tomas Vokoun and Dominik Hasek as goaltenders? 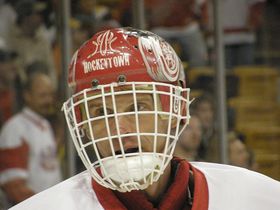 Dominik Hasek, photo: Dan4th Nicholas, CC BY-SA 2.0 "As number 1? Tomas Vokoun is a great goalkeeper, a world champion from 2005 and he was the key player. But there is only one Dominik! He is the only one."

Let's turn to your specialty, which is football. This year is going to be very special for both the Czech team and for you yourself as a reporter, with a chance to cover something you've never been able to cover before.

"I never had the chance to do the World Cup because the last time the Czechs (currently ranked 2nd in the world) played in the tournament was in Italia '90. I was thirteen at the time?! So, yes, I'll be in Germany covering the action and I am very excited about it."

Recently the great Brazilian footballer Pele remarked that he was happy the Czechs didn't end up in the same basket, the same starter group, as Brazil...

"I understand Pele. Because the match between the Czechs and Brazil could be one of the biggest matches of the whole World Cup. As it is, there is a good chance the two teams could meet in the quarter finals - [provided both make it through the group stage. The game could be really big]. "

In other words, better that they meet further along the track, where tension and excitement will be even higher. Who will lead the Czechs along the way?

"Pavel Nedved. In the past, present, and future, he is the leader of the Czech team. Of course, he will need help. It is important Jan Koller gets well. Five days ago when I spoke to him he told me he was trying his best to be there. But, we'll see."

What would be your dream match - both in ice hockey and in football - this year?

"The dream match in ice hockey? Only the final! Against whom? Against Canada: that's number 1 in hockey."

"Facing Brazil at any stage of the way would be a dream match for any of the teams. Brazil."

In Business News: the number of applicants per job stands at 5.2, the lowest figure for eight years; the country's biggest steelworks… 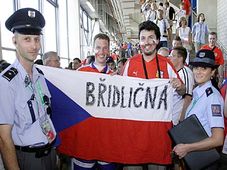 Czech officers reflect on experience of policing at World Cup

Thirty-two teams were in action at the World Cup in Germany, accompanied by millions of fans. Keeping an eye on them were the German… 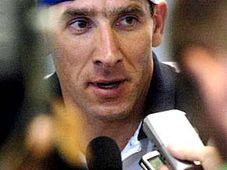 In Sports News: after the country's early exit from football's World Cup, questions are being asked about the medical attention received…