The former US secretary of state Madeleine Albright on Friday paid a visit to the Terezín Memorial where she unveiled a plaque to members of her family who died in Nazi concentration camps in WWII. The former US secretary of state only found out about her Czech roots when she was 59-years-old and has since made an effort to trace her family’s tragic past in Czechoslovakia. 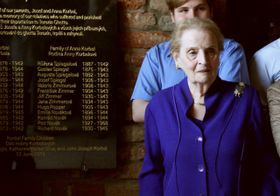 Madeleine Albright, photo: CTK Madeleine Albright was at the height of her career when due to a Washington Post journalist looking into her background she discovered a tragic, hidden chapter in her family history. The daughter of a Czechoslovak diplomat, who spent her childhood in Britain and later moved to the United States, Madeleine was unaware of her Jewish heritage and the fact that more than a dozen of her family members died in the Holocaust.

She first visited the site of the former Terezín concentration camp, where 26 of her family members were interned, in 1997 and has since done her utmost to piece together fragments of family history which her parents kept secret.

In 2013 she published the book Prague Winter, in which she reflects on the discovery of her family's Jewish heritage, on her homeland's tangled history, and on the stark moral choices faced by her parents and their generation. In an interview for the Huffington Post shortly after its release Albright said “the only thing I yearn for is that I wish my parents were alive so we could really talk about this.”

Since discovering her family heritage Albright has repeatedly returned to her old homeland in search of her roots. On her current visit, the 78-year-old former diplomat visited her father Josef Korbel’s birthplace in Letohrad, eastern Bohemia, before visiting Terezín accompanied by her brother John Korbel, her daughters and granddaughters.

There the former top diplomat unveiled a plaque to family members who died in the Holocaust at the Terezín Columbarium. “In memory of our parents Josef and Anna Korbel, and all our relatives who were deported to the Terezín camp, who suffered and lost their lives here” the inscription says. 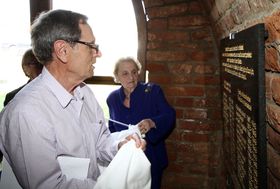 John Korbel, photo: CTK On a 2012 visit to Terezín, Madeleine Albright allowed a print to be made of her hand for the Terezin Museum. “I am not just leaving my hand here, I am leaving my heart,” she told reporters. It was then that she first expressed the wish for her family to have a plaque in the Terezin Columbarium. On Friday she returned with her family by her side, to fulfill that wish.