This Monday saw a new bylaw come into effect, banning the consumption of alcohol in many public places in Prague. But, concerns remain as to just what the ban is supposed to achieve. 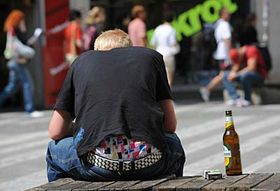 Photo: CTK As of Monday, drinking in numerous public places in Prague has been outlawed. A new bylaw, passed by the Prague City Council, now levies a varying range of fines for those caught drinking near metro stations, schools, hospitals and other public areas. The inevitable question being asked is – what is the purpose of such a bylaw? To many, the answer is clear, it is an attempt to rid Prague’s streets of the numerous vagrants who often sit in public places consuming alcohol. David Binar is the executive director of Forum PSR, which is a self-described association of responsible spirit’s producers that promotes drinking responsibly and in moderation:

“I am quite sure that the reason for adopting this sort of law is the fact that the city has no idea how to deal with homeless people. They cause a mess, they stink – that is what the people say - and they are not a very nice sight, and so the city is trying to get rid of them because they are not able to deal with this social group in a proper manner, they are tying to find ways how to get rid of them and that is how this idea came about – to hit them by prohibiting drinking in certain areas.” 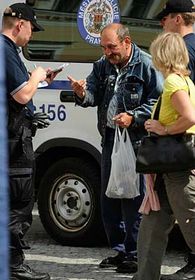 Photo: CTK Prague’s authorities have been trying to clean up the image of the city for some time now. This latest measure represents just the latest in a series of steps. But what of the details of this new bylaw? How exactly do the authorities expect to fine homeless and penniless people thousands of crowns for breaching laws on public drinking? David Binar again: 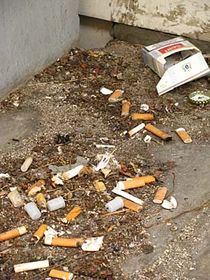 It is important to note that this is not a blanket ban, but rather a complex series of mapped out areas all across the city. Ensuring the required 100m circumferences around schools, playgrounds and metro stations has not always been strictly possible. Plus, the ban also designates several special areas including the area around the National Theatre as well as several of the city’s most prominent squares. A ban on smoking near bus and tram stops has been in effect for years now, but as anyone who has traveled around Prague knows, policing such a ban is often far more difficult than enacting it.