Veterans, military personnel and politicians turned out on Tuesday to commemorate the anniversary of Reichsprotektor Reinhard Heydrich’s assassination. After 66 years, the two British-trained Czechoslovak paratroopers who carried out the killing were dedicated a monument at the site where the daring assassination took place. But what took so long?

V Holešovičkách in Prague 8 is one of the capital’s busiest thoroughfares. Cars and lorries zoom by at speeds of up to 100 kilometers an hour. But it was on this spot in 1942 that Reichsprotektor Reinhard Heydrich’s car slowed to turn a sharp bend, exposing the Nazi leader to attack. Jan Kubiš and Josef Gabčík were lying in wait for Heydrich, they threw a grenade at his car. The senior Nazi died eight days later from the wounds that he sustained.

On the 66th anniversary of Heydrich’s assassination, the beginnings of a monument to commemorate Operation Anthropoid - and the pair who carried it out - is being unveiled. Bagpipers, dressed in the uniform of the Royal Scots Fusiliers, play to the assembled crowds: 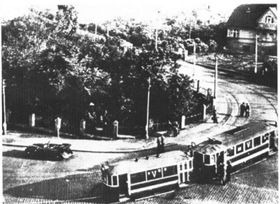 Liben, the place of the assassination “We are here because [Gabčík and Kubiš] were trained in Scotland, so we are here as representatives of Scotland.”

Following on from Heydrich’s assassination, the Nazis took revenge. They destroyed the villages of Ležáky and Lidice, through which, they said, the assassins escaped. Kubiš and Gabčík knew that such retaliation could be expected, and some have asked whether the assassination was the right thing to do.

Jiří Pitín was one of the few to survive the Lidice massacre. At Tuesday’s ceremony he was ambivalent:

“From the point of view of the resistance, this was certainly an act of heroism. But of course, for those who were affected by the repercussions of their actions, well, maybe they weren’t quite as enthusiastic about it. I’m here today because this is where the Lidice tragedy began really.”

The crowds clap as the foundation stone of the monument is revealed. This is the first such memorial to be erected on the site of the assassination. I asked the mayor of this part of Prague, Josef Nosek, what had taken so long: Photo: Barbora Kmentová “For the first 50, almost 60 years following on from the event, no monument was built because the communist regime didn’t want there to be one. And then people felt ashamed that they hadn’t built a monument to Operation Anthropoid before. But under communism, only Soviet forces were commemorated, and because these two were trained in Britain – the communists found them unacceptable.”

Vladimíra Ludková led the drive to have a monument to Operation Anthropoid built on this site.

“I feel, like every Czech, that I have a very intensive relationship with Operation Anthropoid, with the attack upon Heydrich, and with the consequences of this attack.”

At the moment, only a foundation stone can be seen alongside the motorway, but a competition has been launched to find a sculpture to furnish the site. Mrs Ludková and other members of the monument committee hope to find a winner by Wednesday morning, for unveiling next year.