Andrej Babiš, Miloš Zeman, photo: CTK In a short around five minute ceremony at Prague Castle on Wednesday, president Miloš Zeman tasked the ANO leader, whose party triumphed in October’s elections, to form a government and put together sufficient support to stay in office.

Babiš said he would propose a minority government, seeking support and tolerance in parliament where it could. And he borrowed from the ANO party’s slogan in promising citizens a better future:

"The Czech Republic deserves to be again at the top in Europe, where it was under the First Republic. That’s really important. I am personally looking forward to this. Our government will go among the people. We will listen and we will do the maximum so that our citizens have it better. I promise that to everyone."

Babiš has already outlined his new Cabinet team – drawing on a reshuffled set of ANO ministers from the outgoing coalition government and incoming experts. That government should be officially put in place within a week.

And the proposed new ministers have even got together for an informal meeting at party headquarters to get to know each other and outline priorities.

But the 63-year-old prime minister, who made a fortune from his flagship agro-chemical businesses and later bought up some of the country’s biggest newspapers and radio stations, faces a much bigger challenge ensuring parliamentary support to keep himself and the Cabinet in power.

Babiš’ ANO party was the clear winner of October’s elections with around 30 percent of the total vote and 78 mandates in the 200-seat lower house. But his near six week search for firm support from the other eight parties which made it into the parliament alongside victorious ANO has been largely unsuccessful. 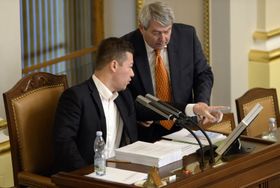 Tomio Okamura, communist party leader Vojtěch Filip, photo: CTK Babiš’ own characterisation of himself and his party as anti-establishment and a break with what he describes as the corrupt political past as well as his gloves off verbal attacks on other leaders are one factor in play. The fact that the ANO leader and one of his top party appointees face criminal proceedings for the fraudulent use of EU funds for the construction of a leisure and hotel complex is another turn off for most of the other parties.

So far, Babiš has just got a promise from the 15-strong parliamentary communist party that they might tolerate a minority ANO government. A scenario of tacit or ad hoc support from the anti-immigrant, anti-Islamic and anti-EU, Freedom and Direct Democracy Party of Tokyo-born leader Tomio Okamura is widely believed to be ANO’s best chance of mustering sufficient support to win a confidence vote in parliament. Okamura’s SPD party with 22 seats is the third biggest in parliament.

The clock starts ticking for that confidence vote to be called 30 days after the government is sworn in, meaning by mid-January. According to the Czech constitution, the president repeats the nomination and appointment process a second time round if the first vote fails to secure support. All the evidence so far points to Babiš’ being given a second shot at installing his government.

And a third, maybe more lucky attempt, for Babiš also beckons when the leader of the lower house takes over from the president in trying to solve the stalemate. The newly elected lower house leader is ANO’s own Radek Vondráček.