Looking back at the events of 1989 in Czechoslovakia, most people will probably think of the student demonstration on November 17th which kicked off the Velvet Revolution. The November protest was the last in a series of events that took place that year and were violently suppressed by riot police. One of them was an illegal rally to commemorate the 71st anniversary of the foundation of Czechoslovakia on October 28th, 1989 held on Prague’s Wenceslas Square.

Prague’s Wenceslas Square saw two very different events twenty years ago on October 28th, 1989. In the morning, communist officials standing on a platform gave their speeches in front of young army recruits about to take their oath of service. A few hours later, police units used truncheons and water cannons to disperse an illegal demonstration organized by independent initiatives, including Charter 77, and attended by an estimated 3,000 people. 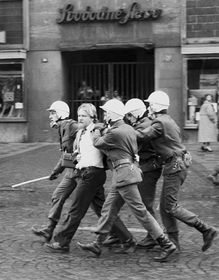 October 28 1989, photo: CTK The spokesman for the Institute for the Study of Totalitarian Regimes Jiří Reichl says the communist authorities were well prepared to respond to such illegal protests.

“The security forces as well as the party leadership and the ministries of the interior and national defence were getting ready for the event because they were alarmed by the mass demonstrations in early 1989. Police in Prague was reinforced by 8,700 men and given extra technical equipment, such as water cannons and armored personnel carriers. We still have photographs of the police units practicing crowd control, including arrests.”

Among the thousands people who attended the illegal demonstration on October 28th twenty years ago was my colleague from Radio Prague’s Czech section, Peter Gabaľ, at that time a young journalist just starting his career.

“There was a varied mix of people: the most ardent opponents of the regime stood near the statue of St. Wenceslas, expecting to be beaten up and very probably arrested. Further away from the statue stood the ordinary people. When the riot police arrived with their plexiglass shields and helmets, we started running and I saw the singer Jan Burian running next to me. I had interviewed him some days before so while still running we said hello to each other and burst out laughing at the absurdity of the situation.” Peter Gabaľ According to data collected by the Institute for the Study of Totalitarian Regimes, policed checked 1,172 people in Prague following the protest; 359 were arrested and 149 were kept in detention. Little did they know that a mere three weeks later another such demonstration would mark the end of the communist regime in Czechoslovakia.

For more information visit the website of the Institute for the Study of Totalitarian Regimes at www.ustrcr.cz

Taking stock of democracy 30 years after the fall of communism

Thirty years ago Czechs took to the streets to demonstrate for freedom and democracy, for the chance to speak their mind without reprisals,…