The annual Designblok festival has just got underway at a number of venues in Prague, and this year it’s bigger than ever. Now celebrating its tenth anniversary, Designblok gives people in the capital a unique opportunity to see up close the cream of furniture, interiors and fashion from the both Czech Republic and elsewhere in the region.

Among the record 200-plus participants in Designblok 08 are some of Prague’s most important museums, galleries, studios, schools and design shops, alongside a number of guests from other countries. The tenth edition features some new elements: a second festival centre in Holešovice alongside its traditional home (albeit at a new venue) in another old industrial quarter, Karlín, and a special section dedicated to fashion. Jana Zielinski is the director or Designblok.

“What pleases us very much is that central European designers apply to Designblok, to exhibit here. Which means Designblok is not just at the borders of the Czech Republic, I would say it’s more about central Europe. We have a lot of Slovak and Polish designers exhibiting this year.”

Why have you introduced this year a fashion element?

“Fashion was also present in Designblok, but after the successful Sony Stage project last year, when we gave space to fashion designers to have their fashion shows at Designblok, we were pushed by Czech designers to make a fashion week included as part of Designblok. They said, we’re already having shows and we’d like to have more media support as well.”

How much is Designblok aimed at the public, and how much at the industry?

“I would say it’s both. I think everybody who is dealing with production or design in the Czech Republic has to see it, or has to be here. The public who are interested are of course welcome. We always like this mixture – we like the fact that schools from small towns in the Czech Republic are coming by bus to see our exhibitions.

“Then on the other hand in the VIP lounge you have the big business going on. So I think it’s something like Karlovy Vary [International Film Festival], but in the design field.”

Over the ten years of the existence of Designblok, have you noticed that Czech people are now more educated about design, and maybe have better taste?

“Absolutely. There is a big difference as well in buying design. Ten years ago there was a small group of people who were who were interested in buying it and who could afford it as well.

“Now we’re in an absolutely different situation after these ten years, when design is really becoming a scene for the public. Almost everybody can buy a nice chair, or a lamp. People want to be dressed nicely – they care not just about their car but also what they are wearing, and what they're surrounded by.

“So I’m very happy that the situation has changed and we are really getting very close to western Europe. I would say in the Czech Republic we have very good conditions for this, because the tradition of understanding design and architecture is very strong here, and this is something which we can follow.

“So I am quite proud that Designblok is not only the oldest, but also the biggest and most important such event even in central and eastern Europe.”

This year’s special guest is the leading Swiss designer Alfredo Haberli. He is taking part for the first time, but has been to Prague to visit the festival in the past.

“I think it’s really a city from the east of Europe which is again opening the doors to countries further east. I think there is a very positive movement going on in Prague. I think the city offers a lot of historical moments, and I think that the young generation is now trying to bring this tradition into the future. I hope they leave the Baroque behind and try to see what comes up new.”

What about the standard of design you’ve seen here? How high is it compared to in your country Switzerland?

“I think the level is the same. Even you see that the young students are willing to work more. They need to communicate. And sometimes in the centre of Europe we are lazy, in a way.”

Designblok’s packed schedule includes a special market for the public both afternoons next weekend. The whole thing comes to a close on Sunday night. 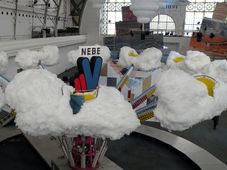 Designblok, Prague International Design Festival opened today Prague. The festival, now in its ninetheenth year, boasts that it is… 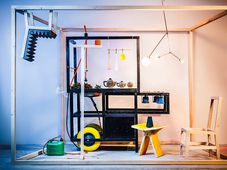 Freedom the main subject of this year’s Designblok

The biggest annual festival of design in Central Europe, Designblok, gets underway in Prague on Wednesday. This year, the festival… 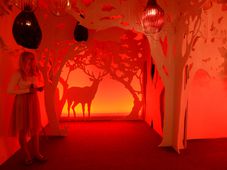 This week Prague is hosting its biggest annual design festival, Designblok, with dozens of presentations, exhibitions and fashion shows…