This week archaeologists revealed they had uncovered a 1,000 year-old mark engraved in an oak tree - the oldest preserved sign of its kind in the world. The exact meaning of the star-shaped mark is not known, although specialists have a good idea it could have been used to designate property. In any case, it is unprecedented for a symbol made a millennium or so ago to have survived to the present day. 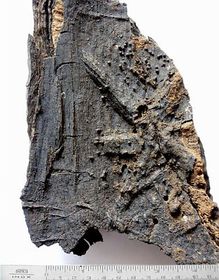 Ancient star-shaped mark, photo: ČTK The find was made in Čelákovice, some 30 kilometres from Prague some four years ago: now archaeologists are preparing to exhibit the item as well as to publish their findings on the ancient star-shaped mark. Carbon-dating suggests the ten-centimetre-long mark was made between the 6th and 10th centuries, cut into on a living tree which later fell into the Labe River. There, it was preserved for hundreds of years. Archaeologist Dagmar Dreslerová told me more about the discovery:

“The find was made by our colleague, the geologist Radek Mikulas, in 2005. He was conducting a study in the area, looking at the age of trees that had been preserved underwater in the sandy banks of the Labe. He came across the sign purely by chance. But he immediately recognised that it was man-made.”

According to the archaeologist, the sign on the tree was once easily visible to passers-by: its maker cut the mark into the white wood of the oak – only after having removed the bark. The star-shape was situated at a height of around one metre and 80 centimetres, that is, at eye-level. And because it dates back to between the 6th and 10th century, it’s almost certain it was made by a Slav. Dagmar Dreslerová again:

“The sign was made at a time when the Slavs had already arrived in Bohemia, so it is very probable that it was made by one of our ancestors. The mark is likely to have designated property: either of the tree itself, or of the surrounding land. Or it marked a border or even a nearby path. The one thing that is unusual is that although we know that such signs existed in history, their appearance is never described anywhere. We never knew what such marks actually looked like.”

Researchers here agree the find is unique: not just to the Czech Republic but in all of Europe and possibly even the world. Czech archaeologists are now hoping to publish more on the star-sign in a prestigious international journal, as well as to exhibit the find in Čelákovice. 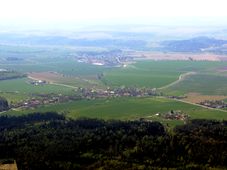 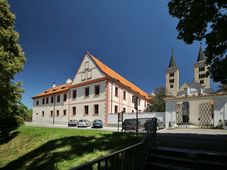 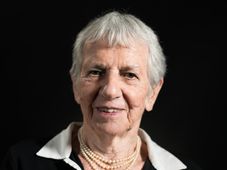 “Everyone was looking north, but topography led me to look south and that’s how I found the Byzantine Port of Apollonia,” says Czech-born marine…