Renowned architect Jan Kaplicky's design for the new Czech National Library building in Prague - which was selected from several proposals submitted in a competition for the project - has engendered much controversy. The futuristic building, which will look like a huge green and purple octopus with a big glass eye, has provoked heated debate among supporters and opponents of the project. Now the Czech Chamber of Architects has entered the fray. They claim the winning design actually breaks the rules that were set for the competition and are going to ask the International Association of Architects in Paris, which supervised the contest, to examine its transparency.

"The problem that we as the Chamber of Architects see is that the jury violated the rules of the competition which they set themselves. In the rules it was strictly stated that the storage spaces for books must be above the ground, which, of course, was quite a complicated task, if we consider the number of books. The winner placed the storage rooms underground and we think that he should have been disqualified already in the first round of the competition."

Do you want a new competition to be held?

"That is a question... We think that many designs which were in that competition were very good and the only problem was that the jury did not stick to the rules. So, some kind of reorganization of the same competition would probably be possible."

If it's proved that the competition was unfair and did not stick to the given rules, what possible effect would it have on the atmosphere among Czech architects and their confidence in the fairness of such competitions?

"I think this is the most serious part of the whole thing. The Czech Chamber of Architects has been trying for the past fifteen years to persuade investors that architectural competitions are the most transparent and reliable way of selecting the right architects. In our field in the Czech Republic it is generally understood like that and architectural competitions are organized on this basis. This particular competition should have been the best example how it is organized on an international scale, but unfortunately it is a disaster and I think for the moral atmosphere it's devastating." 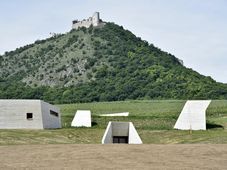 Archeopark Pavlov, a unique underground museum near Mikulov in South Moravia, has won this year’s Czech Architecture Award, given by… Stripped of her citizenship by Czechoslovakia’s Communist authorities after 1968, architect Eva Jiřičná, then in her late 20s, remained…