Just three days ago Jan Čermák and Hynek Matonoha – members of the Czech elite rapid response force serving in Logar, Afghanistan – were honoured by the Czech defence minister and the country’s chief of the general staff for their performance during duty. Three days later, the two, along with the army itself, are embroiled in a major scandal. The Czech daily Mladá fronta Dnes reported on Monday that the two officers from the elite unit had - unbelievably - worn Nazi emblems on their helmets during their tour of duty. What’s more, the daily says, there is evidence their superior knew of the situation but chose only to try and cover the matter up. 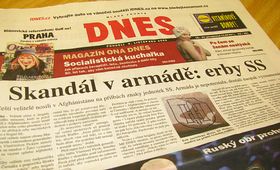 Photo: MF Dnes, 9.11.2009 Czech soldiers serving in Afghanistan are supposed to represent the country’s very best, but now many will be questioning just exactly what that means. On Monday Mladá fronta Dnes broke the story that two officers had worn Nazi emblems of SS units on their helmets while serving in the province of Logar. First Lieutenant Jan Čermák wore the emblem of the Hohenstaufen 9th panzer division while First Warrant Officer Hynek Matonoha wore the emblem of the SS Dirlewanger brigade. Confronted by the paper which had obtained photos, the 27-year-old Čermák admitted he had used the emblem but called it “kind of a joke”, saying he had used it only because it contained an “H” - the first letter of the colloquial version of his first name, Honza. Not surprisingly, many aren’t buying the excuse. Zdeněk Zbořil is a well-known expert on right-wing extremism.

“He had to know that this emblem and that this symbol was on the helmets of the Waffen SS and I don’t believe he didn’t know it was a symbol of the SS units of the German army. I am shocked that a Czech solider could use this symbol and also shocked that both he and the other person were officers. Also, how is it possible that the head of this unit allegedly tried to sweep it under the carpet - to consider it a small incident that was unimportant for the ethos of the army or its units?”

Learning the news, members of the top military brass expressed disbelief and disgust over the matter and on Monday Defence Minister Martin Barták ordered a full investigation, promising there would be repercussions for any who - aware of the situation - had failed to act. Mladá fronta Dnes has pointed to the officers’ superior Petr Procházka, who allegedly ordered the helmet covers featuring the SS emblems – and existing photographs – destroyed. The paper has also questioned whether orders may have come from higher up.

Certainly there are those who knew what was going on: members of the elite unit serving in Logar issued a letter in anonymity just recently, complaining of having to serve with the two officers, making clear they (unlike the two) honoured the values of their brigade and respected their mission within NATO. Their response came after it was revealed by Mladá fronta Dnes last week that another professional soldier had provided training to members of the Czech white supremacy movement. 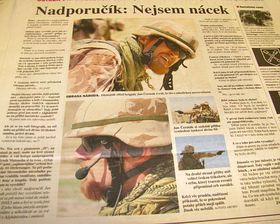 Photo: MF Dnes, 9.11.2009 Clearly, the army is facing major questions, not only over the latest case but also the fact that it has not been able to root out members with extremist leanings. It has said in the past that anyone with such ties had no place in the military but critics contend that so far when it comes to clamping down on the problem, the army has not proven very effective.