In a chilling echo of the past, Russian police on Sunday arrested a group of human rights activists commemorating the 45th anniversary of a 1968 protest against the Russian-led invasion of Czechoslovakia. Although the protesters were reportedly detained for taking part in an unsanctioned demonstration and soon released, the move has evoked widespread condemnation in Prague. 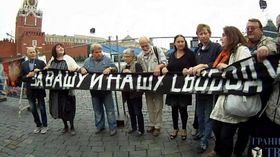 Photo: Czech Television On August 25th, 1968, just four days after Russian tanks rolled through Czechoslovakia to crush the Prague Spring reform movement, eight brave Russians staged a daring protest on Moscow’s Red Square, unfurling banners that read “Hands off Czechoslovakia!” and “Shame to the Invaders!”. They were quickly surrounded by communist police, beaten up and arrested. Most of them spent years locked up in prison or in psychiatric institutions.

Forty-five years later, nine human rights activists gathered on the same square to commemorate the brave protest and raise their voice in support of greater freedom in Russia. They unfurled a banner reading “For your freedom and ours”. Natalia Gorbanevskaya a Russian poet, translator and civil rights activist, who took part in the ill-fated 1968 protest and later wrote a book about the events, had the same message emblazoned on the back of her black T-shirt. The group was quickly surrounded by police and with the exception of Gorbanevskaya –all were detained. Nadezda Mituskin was one of the protesters.

“The police were there even sooner than they were 45 years ago. Thank God, they let Natalia Gorbanevskaya be, but they arrested everyone else.” 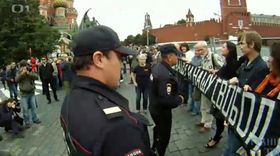 Photo: Czech Television The protesters were released after three hours and face a court hearing for taking part in an unsanctioned rally, with the most likely outcome being a hefty fine. Meanwhile, news of the arrests quickly spread, evoked strong condemnation from Czech politicians. President Miloš Zeman responded to the incident shortly after the arrests took place.

“I do not know why the group of protesters was arrested, but if they were arrested for recalling the anniversary of the Soviet-led occupation then I would consider it a big mistake. Russia, as a successor state to the Soviet Union, has already apologized for the invasion and I would even consider it suitable if the country’s leading representatives themselves stood at the forefront of such demonstrations.”

The Czech Foreign Ministry on Monday issued the following statement.

“The Ministry of Foreign Affairs is surprised that a peaceful and non-conflicting event dedicated to this important matter of common Czech-Russian history was repressed by the Russian authorities. The Czech Foreign Ministry believes that Russia is aware of the symbolic meaning of repressive intervention against such a commemorative event and hopes that no further measures will be taken against the participants of the event.”

Czech Radio’s commentator Libor Dvorak says that while the 1968 invasion remains a sensitive issue for Prague and Moscow he does not believe that the repressive police action reflected Russia’s stand on the events of 1968. 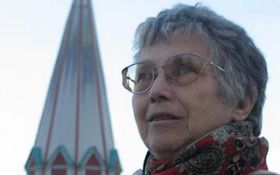 Natalia Gorbanevskaya, photo: Dmitry Kuzmin, CC BY-SA 3.0 “It is natural for us to reach this conclusion, but I think that what this incident mainly reflects is the character of Putin’s authoritarian regime. All gatherings on Red Square are strictly banned and that ban is enforced without question. The fact that Natalia Gorbanevskaya alone was not detained shows that the police officers in question knew that this demonstration was related to the 1968 invasion and recognized her as the only 1968 protester there. But frankly, there is not great public awareness of the 1968 invasion anniversary in Russia today.”