The remains of Czech actor Ivan Jandl were interred today at Prague’s Vyšehrad cemetery thirty years after his death at the age of 50. Jandl was the first Czech to win an Oscar, albeit of the Special Juvenile variety, for the then nine-year-old’s performance in the Swiss-American production of the 1948 film "The Search". 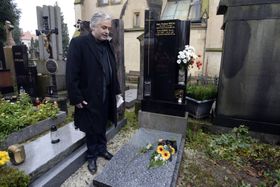 The president of the Czech Actors’ Association Ondřej Kepka at Ivan Jandl's grave at Prague’s Vyšehrad cemetery, photo: CTK “Where is my mother? I have a mother! I know I have a mother!”

“Look, it is difficult to…”

The Search, or Poznamenaní, tells the story of a young Auschwitz survivor searching for his mother in the ruins of post-war Europe. The film stars Montgomery Clift, Aline MacMahon and fellow Czech-born actor Jarmila Novotná. Asides from the Juvenile Oscar, The Search also won an Academy Award for its screenplay.

In 1947, young Ivan Jandl was a promising member of Czech Radio’s Disman’s Children's Choir. This led the boy to be selected for a supporting role in the MGM production despite speaking no English; instead he had to learn his lines phonetically. Here’s how the film was promoted to audiences at the time:

“…and now again a troupe of American filmmakers has journeyed abroad, this time to produce yet another great picture in its authentic background, in the hitherto unphotographed American zones of Western Europe. It’s title: The Search – the dramatic story of a runaway youngster in search of a future, an adventurous young American in search of simple justice, and a wandering mother in search of her son.” Photo: Public Domain But, despite a promising performance, which also earned him a Juvenile Golden Globe, the communist takeover in 1948 meant that Jandl was not allowed to travel to America to receive his Academy Award in person. Despite some theatre and radio work, Jandl’s subsequent career as an actor largely evaporated, and he was also blighted by a variety of illnesses, including cerebral palsy and typhoid fever. He died of complications stemming from diabetes in 1987.

The Czech Actors’ Association is sponsoring the reburial in conjunction with the Actors’ Life Foundation (Nadace Život umělce), which has created a special gravesite at Vyšehrad to honour figures from the Czech cultural sphere. Exactly 20 years have passed since the independent Czech Republic celebrated its first ever Oscar win for Best Foreign Language Film.…