Nine Czech female singles players started this year’s Wimbledon tennis tournament, two of them in the world top 10. However, the only one left standing is a name few would have expected, Barbora Strýcová. The 33-year-old is now preparing to face Serena Williams in her first ever Grand Slam semi-final. 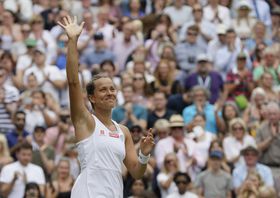 Barbora Strýcová, photo: ČTK/AP/Kirsty Wigglesworth There were high hopes for Czech tennis ahead of this year’s Wimbledon, with two-time winner Petra Kvitová and world no. 3 Karolína Plíšková competing.

In the end, however, the last Czech woman standing is one that few would have expected, Barbora Strýcová.

Unseeded and ranked 54th in the world, she overcame British hope Johanna Konta in straight sets 7:6 and 6:1 on Centre Court on Tuesday to reach her first ever Grand Slam semi-final.

Czech Radio’s tennis correspondent Jaroslav Plašil, who is at Wimbledon, says that Strýcová’s success is in part down to her learning to contain her emotions.

“It certainly is the achievement of her lifetime, because she has never got so far in a Grand Slam. She is probably in her best form right now. I think that as she got older, she gained enough experience to deal with her emotional nature on court, which used to be a challenge in the past.”

On Thursday, Strýcová is set to face her biggest challenge yet at the All England Club – seven-time Wimbledon champion Serena Williams.

Strýcová has lost all three of her previous games against Williams. But the tennis legend is yet to win a Grand Slam since giving birth to her daughter in 2017 and has lost more sets than the Czech on her journey to the semi-final.

Both are also still playing in the doubles and the Czech Radio reporter believes it is this game intensity which may actually help Strýcová on Thursday. 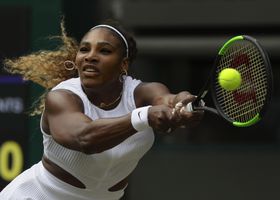 Serena Williams, photo: ČTK/AP/Kirsty Wigglesworth “I don’t think she has the time to realise it all at the moment, which is good in her case because of her emotions. She is still in the doubles part of the tournament and that might make it easier to deal with the pressure.”

Czech women’s tennis has experienced many successes in recent years and this trend is likely to continue for at least a while, thanks to upcoming talents such as the 22-year-old Karolína Muchová, who got to the quarter-finals at Wimbledon.

There are plenty of reasons behind this, says Jaroslav Plašil, including a generation of unique talent and good trainers. One very important ingredient, he says, is the support of dedicated parents and successful examples from the past.

“In the Czech Republic there is a very strong tradition of Czech tennis players, whether professional or amateur, getting their children into tennis as well. That is a big strength of Czech tennis, the family education. Furthermore, there are also big examples to follow, whether it is Martina Navratilova or later stars such as Jana Novotna, Helena Sukova, Hana Mandlikova and others.”