Berdych crashes out at Australian Open

Czech tennis player Tomáš Berdych played in the quarterfinal match at the Australian Open on Tuesday, the furthest the sixth-seeded player has ever gotten in the Grand Slam tournament. But if he had played well so far, he hit a wall in the form of Serbian opponent Novak Djokovic at the Rod Laver arena in Melbourne. 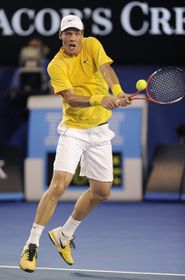 Tomáš Berdych, photo: CTK Twenty-five year old player Tomáš Berdych, sixth seed at the Australian Open, knew the quarterfinal on Tuesday wouldn’t be easy: in their last five encounters prior to their Melbourne match-up, the Czech player had only beaten Serbian opponent Djokovic once. Still, in the past the player has clinched some classic upsets and pulled through in long five setters; this time there was nothing of the sort. Berdych, who had been showing impressive form in the previous matches, failed to bring his ‘A’ game on Tuesday, getting off to the poorest of possible starts. He lost the first set in just 36 minutes by a score of 6:1.

In the second set, which took twice as long to complete, things improved for Berdych and saw much better tennis from him. For a while it looked like the Czech player – a finalist in last year’s Wimbledon – would battle back. There were glimmers of brilliance as he broke Novak Djokovic’s serve early and worked up to a dominant lead of 4:1.

Unfortunately for him the tables turned again. Djokovic, the third seed, was able to fight back and tie it at four apiece. Berdych then blew a chance to put the second set away and lost when it went to tiebreak.

In the third set, it was all Djokovic and Berdych’s last defence quickly crumbled. He lost the third by a score – again – of 6:1. His opponent Novak Djokovic, on the court shortly after winning, praised Berdych though and made clear the entire match had hinged on the outcome of the second set. 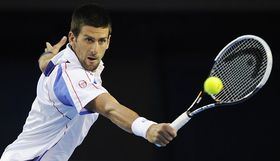 Novak Djokovic, photo: CTK “In a lot of points I was trying to change the pace and put him out of the comfort zone. When he is in his comfort zone he is a very difficult player, he hits very strong with powerful stroke, powerful serves. I needed to put some variety in the game and that’s what I did. The second set was very, very close and I was lucky to get the win there in the tiebreak.”

Czech fans, disappointed by Berdych’s defeat, still have Petra Kvitová to root for in the women’s tournament: the 20-year-old is in her second Grand Slam quarterfinals and faces World No. 2 Vera Zvonareva on Wednesday.