Czech tennis player Tomáš Berdych, seeded 15th at the French Open, has made it to the tournament’s semi-final. On Tuesday he powered past Russia’s Mikhail Youzhny in straight sets. He will next face Robin Söderling of Sweden – a finalist at Roland Garros last year, also on a roll: on Tuesday he ousted the world No. 1 Roger Federer.

Twenty-four-year-old Tomáš Berdych arguably couldn’t be playing better than this, steaming ahead at Rolland Garros, now through to the semi-final. On Tuesday the player lost little time dispatching Russia’s Mikhail Youzhny in straight sets, getting 36 winners and clinching the match 6-3, 6-1, 6-2. The overall playing time was one hour and 54 minutes. Speaking at a press conference in Paris after the match, here is what the player had to say: 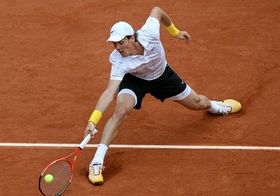 Tomáš Berdych, photo: CTK “My game was pretty good today and on the other hand there were pretty tough conditions today in Paris. It was two things: playing against Mikhail and also trying to fight with the conditions as well. So it was tough as well and I am pretty happy that I can keep serving well in these pretty wet and cold conditions and that’s what I need, you know, a good serve. Then I can be aggressive and play my tennis and that’s what happened today.”

Berych will face Robin Söderling, a finalist in Paris in 2009, next, and he himself is on a roll shocking World No. 1 Roger Federer in their quarterfinal match-up, which he won in four sets. That means the semi-final against Berdych could prove to be an exciting matchup with plenty of unexpected twists. On Tuesday the Czech player was asked about winning the whole tournament, but he refused to speculate, saying he was focussing on one game at a time – obviously he isn’t in the final yet. Tomáš Berdych, photo: CTK “Just slowly with any predictions of winning the tournament: still there is another opponent in the next round. The semi-final will see a very strong opponent. He reached the final here last year and he has a lot of experience. He also beat Roger Federer here today which is always a great result to achieve. So I really want to take it the same as all the previous matches: to just try and do my best on the court for the next one and whatever is going to come next will come next.”

Berdych best placing in a grand slam event before now was a quarterfinal appearance at Wimbledon in 2007.