Mild weather and perfect conditions over the past few days have brought renewed opportunity for professional and amateur bird-watchers in the Czech Republic to observe an incredible sight: thousands of wild northern geese that have been wintering at the extensive Nove Mlyny reservoir. Found in the Breclav region in southern Moravia, the site has become a traditional home away from home for geese from all over northern Europe and northern Russia. An added attraction this year has been an increased count of an amazing 34, 000 birds. 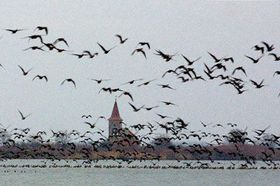 Nove Mlyny reservoir, photo: CTK Josef Chytil is an ornithologist at the Palava Nature Reserve at Nove Mlyny, who's been monitoring the birds.

"The present situation is such that there is indeed around 34, 000 northland geese, the majority of them are white-fronted and then there are Bean geese and there are also several hundred Grey geese."

"It's hard to tell but when we talk about white-fronted surely these birds are coming from Scandinavia and from Russia. There's a question of barnacle geese - we saw five specimens of these very rare geese in our country, and this species breeds only in Greenland, Spitzbergen, Norway, and northern Russia. But, from the last winters we already have some records of coloured geese from Yamal, Siberia. This is also the most important area for this species, so very probably the majority of these northland geese come from Russia."

How excited have you been to observe some of these specimens? What kind of behaviour have you seen?

Nove Mlyny reservoir, photo: Breclav.info.cz "There is a quite interesting connection between northland geese and white-tailed eagles. Nove Mlyny is also the most important breeding ground for these white-tailed eagles in the Czech Republic, the average number is about 20 - 40 specimens, but this year there are 50, which is very high for these eagles. And, it seems, that when there is hunting season the main food for these white-tailed eagle are these geese, injured or shot by the hunters. We saw already several times injured geese on the ice. Once for instance we saw a circle of 17 eagles waiting to get at an injured goose. Just waiting in a circle, like vultures, just for this one specimen."

Where will the birds move to next? What's the next stop on their route after Nove Mlyny?

"That's a good question. Indeed we don't know, some of them are probably migrating west and north, some have been collared in the Netherlands - this area seems to be a quite important step. But there is a question about their next step as they fly away north; we really don't know exactly."

Finally, it must be an incredible moment to suddenly be able to see such a great number of birds, in the thousands, take flight. What is that like?

"Yeah, surely. It's indeed an incredible phenomenon, especially when they are waiting in the middle of the dam of this reservoir because you can see the sun rising behind the Palava Hills. Plus you have this calling of thousands of geese; naturally people want to have a look."

Remnants of medieval wall dating back to 1041 unearthed in Břeclav 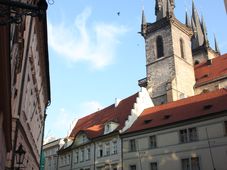 In Magazine: Prague among top 20 most visited cities in the world; police officers complain their bulletproof vests aren’t bulletproof;… Chinese investors are set to build a brand new spa resort in the small South Moravian town of Pasohlávky. On Friday, the representatives…