British Foreign Secretary Boris Johnson for Czech Radio: We will make sure our friends and partners in the EU are not left in the lurch 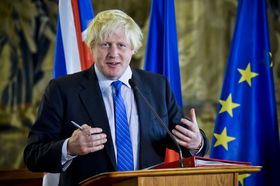 Boris Johnson, foto: ČTK British Foreign Secretary Boris Johnson visited Prague earlier this week on the first stop of a tour of European capitals to explain the British position on Brexit outlined by Prime Minister Teresa May in Florence. In an interview for Czech Radio the British foreign secretary spoke about his country’s aims and priorities in the two-year transitional period ahead as well as after the Brexit cut-off line. Czech Radio’s London former correspondent Jiří Hošek began by asking him how he views the outcome of Germany’s parliamentary elections.