Cardinal Tomáš Špidlík dies at the age of 90

One of the greatest Czech theologians, a member of the Jesuit order and a prolific author, Cardinal Tomáš Špidlík died in Rome on Friday at the age of 90. He spent most of his life abroad but will be laid to rest in his native Moravia.

The Catholic Church has lost one of its leading scholars and a great man who was highly respected in the Czech Republic and abroad. Tomáš Špidlík, a member of the Jesuit Order and an expert on Eastern Christianity, wrote dozens of studies, books and even fairy tales. In 2003, Pope John Paul II appointed him cardinal in recognition of his achievements. František Hylmar is the provincial superior of the Czech Jesuit Order.

“One of Cardinal Špidlík’s greatest merits was his conviction that it’s possible to find common ground again, after so many centuries, for both the Christian East and West. The motto of his work was the word ‘heart’, which means that the heart is the real centre of human beings where people can really meet each other and also encounter God. And the heart can also be a place where the Christian East and West can meet.”

Tomáš Špidlík was born in the Moravian town of Boskovice in 1919. After the Nazis closed Czech universities in 1939, he spent the rest of the war studying in Velehrad where the missionaries Cyril and Methodius once preached Christianity to the Slavs. This meeting point between East and West had a profound impact on young Tomáš Špidlík.

“Velehrad is a place linked with the great personalities of Saints Cyril and Methodius, who lived before the great schism between the Christian West and East. They symbolize the unity, the original unity of the Christian Church, and I think that Father Špidlík, once in Velehrad, became aware of the issue of the lack of unity between the two churches, and that’s why he felt drawn to the problem and spent all his life working in this field.”

After the Second World War, Tomáš Špidlík was ordained priest and went to study abroad. The communist takeover in 1948 made it impossible for him to return to Czechoslovakia. He moved to Rome, worked at Vatican Radio and became a university professor. He only visited his native land after the fall of communism, and received many Czech and international awards. Father Hylmar says that his kind and open personality, together with his sense of humour, helped improve the perception of the Catholic Church in the minds of Czechs. 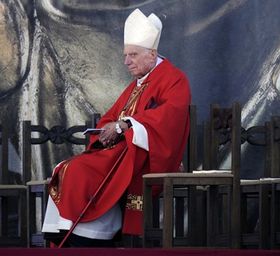 Cardinal Tomáš Špidlík, photo: CTK “I think he really helped change the popular and somewhat dark image of the Catholic Church and of the Jesuit Order, and I think that in the Czech lands, this was his greatest merit.”

A requiem mass for the late Cardinal Špidlík will be celebrated in St. Peter’s Basilica in Rome on Tuesday. In accordance with his last will, he will be buried at the Moravian pilgrimage centre in Velehrad. 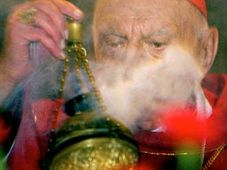 Cardinal Spidlik on the significance of Christmas Every year, the Czech Foreign Ministry bestows the Gratias Agit award on select people who promote the good name of the Czech Republic… A day of mourning to remember Pope John Paul II

As in many countries around the world, Friday 8th April was declared a day of mourning in the Czech Republic. It is a sign of just…