A meteorological column erected on the Prague square Vítězné náměstí in 1914 has just been restored. It is one of only two remaining such columns in the Czech capital, though in the past they were a common sight in the city and indeed throughout the country. I discussed the restoration job and more with Eva Heyd of the Czech National Trust, who initiated the project. “They were supposed to give information about the temperature, about pressure.

“Also they had some geographical information, like where is West and South and what is the exact latitude.

“There were many of them. In Czech cities and towns there were more than 100 of these columns.”

Today how many of them are still standing? “Some of them are used for something else and some of them have been restored. For example, in Františkovy Lázně there is one.

“There were several of them and all of them sort of disappeared over time.

“But recently we have two of them. One is in Dejvice [Prague 6, location of Vítězné náměstí] and the other one is in front of Masaryk Train Station.”

Why did the Czech National Trust select the one on Vítězné náměstí to restore?

“We selected both of them, we just have trouble finishing the other one – we hope it will be finished next year.

“Both of the columns were used as something else during that time.

“They were used by the electrical company that takes care of public lighting. 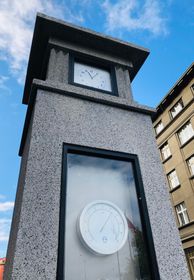 Restored meteorological column on Vítězné náměstí in Prague, photo: Ian Willoughby “With the Masaryk station one there is a problem, because they have some kind of major thing there.

“We have been talking to them for two or three years already and they don’t want to go away [laughs].

“But I’m happy we have managed at least with this one column.”

Will the column actually be used by meteorologists, or will it be just something nice for people to look at?

“Well, you can really read meteorological information there, but it’s also nice to look at.

“It also gives you information about the time.

The restored meteorological column, which stands at the corner of Buzulucká St. and Vítězné náměstí, will be officially unveiled next month at a ceremony attended by Prague 6 councillors and representatives of the company Penta Real Estate, which sponsored the work.