Chamber of Commerce seeks another doubling of quota for Ukrainian workers

The government in January agreed to double the number of Ukrainians it would allow in as fast-track migrant workers to nearly 20,000 per year, in a bid to help address the chronic labour shortage, which has companies in the export-driven economy struggling to fill orders. According to Czech Chamber of Commerce, the fast-track scheme is a drop in the proverbial bucket – but still paying dividends. 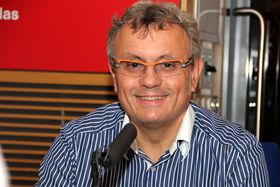 Vladimír Dlouhý, photo: Šárka Ševčíková / Czech Radio A survey released this week by the Chamber of Commerce shows demand among employers for Ukrainian workers has nearly doubled every year since the global financial crisis ended. With some 300,000 vacancies now on the labour market, doubling the quota for Ukrainian workers to 20,000 will hardly make a dent, says chamber chairman Vladimír Dlouhý.

That said, the Chamber hopes to convince the government to – yet again – double the quota, arguing Ukrainian workers benefit Czech society as a whole. At current levels, the state is getting some 2 billion crowns a year in direct and indirect taxes and other levies linked to the employment of workers through the regime, says Mr Dlouhý.

"We can say that every Ukrainian who has gained work through this work regime will contribute to a Czech pensioner some 440 crowns a year. This means that the fast-track scheme is starting to have a bit bigger impact and in a wider context. They contribute to the retirement system, and few of them will be drawing from it, taking it back."

Foreign workers finding employment through such schemes are also tied to a specific employment relationship lasting up to two years, so if their contracts not renewed or their position eliminated, they are not entitled to draw unemployment benefits. Illustrative photo: Michal Polášek / Czech Radio According to the Chamber of Commerce survey, only 2 per cent of employers do not plan to extend existing contracts but three out of five definitely will. Among them is the very first employer to hire a Ukrainian worker under the government scheme, metal refiner Abydos.

"Without foreign workers, I can’t imagine how we’d get by in the current situation, especially when the industry keeps growing and we don’t want to reject orders. The Ukrainians working for us – there are 13 now – have integrated quite well".

The biggest problem in hiring Ukrainian workers, cited by 88% of those surveyed, is the length of the process, which can take six to nine months from advertising a position to filling it.