The renovation of Prague’s Charles Bridge, one of the most distinct monuments in the Czech capital and the second oldest bridge in the country, began nearly a year ago. Recently, builders have been criticized for not respecting the historical value of the bridge and specifically for replacing too many original sandstone blocks with new ones. Photo: CTK Visitors who want to cross the Vltava from Old Town to Malá Strana across the Charles Bridge now have to put up with the noise of renovation works. General renovation of the bridge started in August last year, and in parts of the bridge only half of the roadway is open for pedestrians. Railings on both sides are being restored and some sandstone blocks are being replaced with new ones. The extent of this particular renovation has been criticized by some preservationists as well as members of Prague City Hall. But Zdeněk Batal, who is the building inspector for the main contractor, says the builders realize how valuable each single stone block is. Photo: CTK “We have been criticized for replacing stones which didn’t need to be removed. I have to say that this is an issue that is really damaging to us, because the decision on which stones to replace and which to leave is one of the most difficult we have to make. We’re not happy about the ones that we have to replace, since we know that the more original stones the bridge has, the higher its historical value will be.”

The Culture Ministry recently sent inspectors to the site to see whether critics of the renovation were right. The results should be published by the beginning of August but preliminary reports say everything is going well. Zdeněk Batal says some of the original stones simply had to be removed as they would not be able to hold new insulation in place. 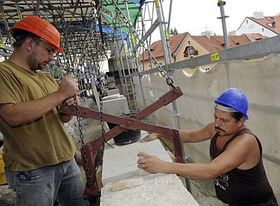 Photo: CTK “There are several criteria. There are stone blocks in the upper part of the railing which might perhaps be replaced in the near future. Here, we can be a little benevolent. The stones in the lower part, however, below the level of the road, will have insulation connected to them. We want the insulation to be functioning for some 50 years. That means that for the next 50 years, it will not be possible to replace any block immediately next to the insulation.”

The whole bridge is expected to be completely renovated by 2010. Meanwhile, people will have the opportunity to see the progress for themselves. Pavel Kameník is the spokesman for the general contractor SMP CZ.

“We recently set up a website www.opravakarlovamostu.cz where people can find all up-to-date information about the renovation. We are now considering translating the website into English and French as well.” 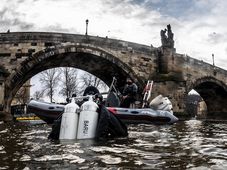