Many in the Czech Republic were shocked and outraged when neo-Nazis firebombed the home of a Romany family in north Moravia earlier this year. The family’s youngest daughter Natálka suffered horrific burns in the attack, and was not expected to survive. So there were scenes of joy on Wednesday when the two-year-old was released from hospital after eight months of intensive treatment.

Natálka laughed happily in the comfort of her family’s new home on Wednesday, a sight many did not expect to see when she was rushed to hospital with severe burns on 80 percent of her body. In the early hours of April 19 this year, the family’s small house in Vítkov, north Moravia was the target of a racist firebomb attack that also left both of her parents suffering from burns. Natálka with her parents, photo: CTK Over the last eight months, Natálka has undergone around 20 major operations. She was given a general anesthetic some 100 times to allow nurses at the intensive care unit of the children’s department at Ostrava hospital’s intensive care unit to change the dressing on her wounds. Three times doctors believed she was close to death, and the fact she has recovered enough to finally go home has been described as a miracle.

Her mother Anna Siváková spoke to the media on Wednesday.

“My feelings are simply indescribable…I’m just happy that things have worked out well and we can now go home. As for the doctors who looked after her, I’d love to give them all a big hug.”

Though Natálka is now at home and playing once again with her three older sisters, her medical treatment is a long way from over. In fact, she will bear the consequences of April’s attack for the rest of her life. Anna Siváková (center), photo: CTK The girl’s release from hospital was delayed slightly on Wednesday while she was measured for special stockings she will have to wear for 23 hours a day. They are made of elastic and it is hoped the pressure will help her skin heal enough to avoid at least some plastic surgery. However, it is expected she will still have to undergo extensive reconstructive surgery.

Her parents will also have a lot to do, as Natálka will need to have ointment applied to her skin three times a day to prevent it drying and cracking. She will require a lot of exercise. What’s more, unlike most children of her age she has not yet learnt to walk, after her eight-month stay in hospital interrupted her normal development. Doctors say she is unlikely to remember anything other than her hospital bed.

The four neo-Nazis charged with firebombing Natálka’s family’s home are unlikely to appear in court before next spring. Three have confessed.

The medical insurer who has covered the cost of the child’s treatment says it will seek financial compensation from the perpetrators, as well as money to fund what is likely to be many years of medical care. 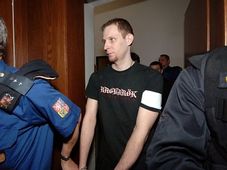 Four Czechs behind a brutal arson attack last year, that targeted the home of a Romany family in the east of the country, have been…