Well, the shock-waves are still being felt from the resignation earlier this week by the mayor of Prague, Jan Kasl. Mr Kasl stepped down on Tuesday, less than three weeks before the general elections, saying his council colleagues - and especially those from his own Civic Democratic Party - were turning a blind eye to the problem of official corruption in Prague. His decision to resign as mayor and leave the Civic Democrats has provoked angry condemnation from the party leader, Vaclav Klaus, who says the move was a cowardly attack, orchestrated by forces outside city hall. Well my colleague Rob Cameron has been following the story, some strong words from Mr Klaus there.

Jan Kasl and Vaclav Klaus, photo: CTK Rob Cameron: "Yes, it does seem Mr Klaus was truly stung by Jan Kasl's resignation and his accusations. The Civic Democrat leader described it as "cowardly", "dishonest", "below the belt", and even said it was only thanks to him that Mr Kasl had lasted for three and a half years as mayor, adding that he now deeply regretted giving him his support. Some analysts are saying the ferocity of Mr Klaus's response is evidence that the resignation is a true blow to both him and the Civic Democrats. Others believe Mr Klaus is merely playing for the sympathy vote."

The Civic Democrats are claiming the resignation was a carefully orchestrated attack, masterminded from outside the city hall. Who do they believe is behind it?

RC: "Well, Mr Klaus pointed the finger squarely across the river to Prague Castle, the seat of President Vaclav Havel, his arch rival. He wouldn't name Mr Havel outright, saying it was the work of "forces well known from the past", meaning Mr Havel and his advisers. Mr Kasl has dismissed these claims, saying he had acted completely on his own. And it does seem that trying to blame Mr Havel is a rather feeble attempt to turn the situation around and make some political capital out of it." 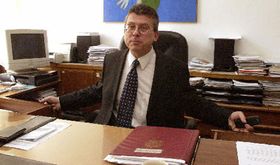 Jan Kasl, photo: CTK Well, it's less than three weeks to go before the elections, how much damage has Mr Kasl's resignation really done to the Civic Democrats' chances?

RC: "That's hard to say. The Civic Democrats have survived worse attacks in past, and they'll survive this one. But all analysts agree this is a blow, because any kind of disunity reflects badly on the party - look what happened to the Four-Party Coalition last year. It won't affect the party faithful, they'll remain firmly behind Mr Klaus; after all he has an iron grip on the Civic Democrats, in fact Mr Kasl was one of his few potential rivals. But those floating voters who were thinking of possibly voting for the Civic Democrats might be wavering - a recent opinion poll put corruption at the top of list of priorities, and Mr Kasl has basically accused his party of sponsoring it. This election looks like being extremely close, and it'll be floating voters who'll decide it. But for a definite answer to that question, I'm afraid we'll have to wait for another two weeks."