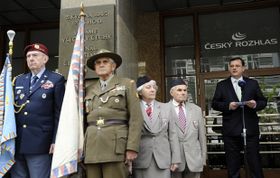 Petr Nečas (right), photo: CTK A military band plays, marking the 66th anniversary of the Prague Uprising. On Thursday, Czech Prime Minister Petr Nečas laid a wreath in front of the Czech Radio building in honor of those who lost their lives in the tumultuous days of May 1945, when the Prague population fought back against their German oppressors after nearly seven years of occupation. The prime minister paid tribute to the victims of the Prague Uprising and stressed the importance of a free society.

“We can always lose our freedom, it is an elusive thing. Most importantly, we have to learn how to live freely, so that we can recognize the pitfalls of freedom as quickly as possible. Let us not let anyone interfere with our freedom more than is necessary, even if in some cases it could be the state itself. Today’s fight for freedom is less dramatic, but just as important, because we have to protect this freedom not just for our own generation, but for future generations as well.”

At the 66th anniversary ceremony, the acting director of Czech Radio, Peter Duhan, also welcomed a number of other senior officials, among them the head of the lower chamber of Parliament, Miroslava Němcová, and the head of the Senate, Milan Štěch, who stressed the important role of Czech Radio in the history of its country, and especially in the Prague Uprising. Milan Štěch, photo: CTK “The uprising took place after six years of unimaginable fear and terror, multiplied by the assassination of Heydrich. But despite that, over 2000 citizens had the courage to rise against the Nazis and participate in the armed fight against them, or build barricades on our streets. All of them risked their lives in a moment when many thought it was enough to wait for the allied forces to liberate the nation.”

The Prague Uprising came at a moment when Germany’s defeat was already sealed and Berlin was occupied by the Red Army. But German forces were still occupying Prague, with the Red Army in the north east and the US army unable to move further after liberating Plzeň, since a demarcation line had already been drawn between the Western allies and Russians. Following the appeal broadcast on Czech Radio, fighting soon spread throughout the capital. Citizens erected barricades, but those who joined the uprising were outnumbered by the Germans, who tried to reclaim the city. Nearly 1,700 Czechs were killed in the uprising.

Also in attendance at the 66th anniversary event were Prague residents who witnessed the historic happenings of May 1945 first-hand, among them Marie Tasebová, who was 16 when the Prague Uprising took place.

“I came because I remember the events from when I was young. It is a happy memory, we were glad that it ended so well, even though there were a lot of victims, but we are celebrating the anniversary because in the end, it all ended well.”

The Prague Uprising ended with a ceasefire on May 8. The following day, Red Army soldiers liberated the city.