Could Nedvěd come out of international retirement for Euro 2008?

There has been renewed speculation that Czech soccer star Pavel Nedvěd might come out of international retirement to represent the Czech Republic at Euro 2008 – the European football championship held in Austria and Switzerland this summer. While he has not directly addressed the issue as yet, his return would almost certainly be welcomed by coach Karel Brückner, currently left with a major void in the midfield. Tomas Rosický, who succeeded Nedvěd as captain, remains injured and might not recover in time for the kick-off. 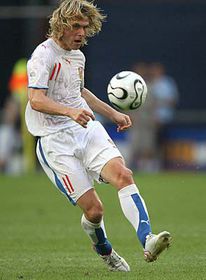 Pavel Nedvěd, photo: CTK The possibility of seeing Czech star midfielder Pavel Nedvěd wearing his country's colours again has come to the fore, fuelled by uncertainty over the fitness of current team captain Tomáš Rosický. Rosický looks doubtful to appear this summer due to a knee injury which has now plagued him for months. This leaves the national side lacking a key playmaker as well as natural leader. As Euro 2008 approaches, the question of whether Pavel Nedvěd could be called up to fill the position has become more and more pressing. Marek Bílek writes for the Czech daily "Sport":

"It could be that Rosický will not be there at the European Championships, the chances are getting slimmer and slimmer that he will start. Nobody knows exactly what injury he has, but he has missed more than two months already, a long break, and the chances of playing are therefore getting smaller. The logical step would be a call from Karel Brückner to Pavel Nedvěd, and as such the chances of Nedvěd playing are increasing all the time with Rosický's continued absence."

Pavel Nedvěd has long been a leading and hugely respected figure in European football: in 2003 he won the Ballon d'Or for European Player of the Year, and represented his country consistently up until 2004. He retired for the first time following the Czech Republic's highly-praised bronze finish at Euro 2004, only to come out of retirement to give the national side a crucial boost in the World Cup two years later. Even now, he continues to compete at the highest level for Juventus in Italy's prestige football division Serie A. Sports writer Marek Bílek again:

"Three weeks ago, my colleague watched Juventus for two matches, and he said to me, Pavel Nedvěd was the best player on the pitch, he's still absolutely in form, he is a world class player, still. And that's reason he should be in the national team, if he wants, because he is, at this moment, still absolutely the best player from the Czech Republic."

Some in the football world have speculated that it could be unsettling for some players if Nedvěd were to suddenly return, not least because of his absence in qualifying. But, it is indisputable that his great experience as well as talent would be a bonus, from which younger players playing alongside him would certainly benefit. Marek Bilek once again:

"He is a big fighter and he can show other players how to beat an opponent, and everybody who sees how much he wants to win can follow his example - that's his greatest attribute. It was seen at the last World Cup in 2006 in Germany, even though he missed the whole qualification. He went to the World Cup and he was the Czech Republic's best player as well as being absolutely the best prepared for the tournament."

For now, it is anyone’s guess whether Pavel Nedvěd will be called upon by Karel Brückner, and no one really knows whether the player himself would be willing to come out of retirement yet again. If he does line up for the opening match against European Championship hosts Switzerland in June, few doubt he could rejuvenate the Czech team not only with considerable skill but also a fierce desire to win. 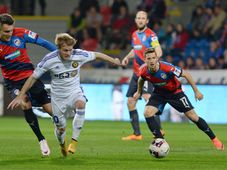