Could racing circuit in Prague become a reality?

Earlier this week Antonin Charouz - the controversial Czech businessman and former race car driver - proposed a new project for Prague that has apparently gained backing of a number of city officials, including Mayor Pavel Bem: that Prague see the construction of a prestigious new racing circuit. On Monday Mr Bem attended a presentation by the businessman at city hall, the new track in Prague but also a hockey arena, a hotel, shopping venues, and more. Could it become a reality? 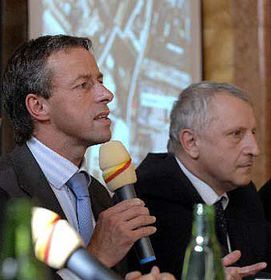 Pavel Bem and Antonin Charouz, photo: CTK Many fans of Formula 1 racing or car racing in general, will probably welcome the idea of a high-grade circuit in Prague, yet for many the building of an actual circuit remains highly unlikely, or even undesirable because of the huge investment and intricate planning involved. So far, the idea has gained support at city hall at least with Mayor Pavel Bem, who backed Antonin Charouz's idea earlier this week. On Monday Mr Charouz presented the proposal for a Formula 1 quality track to be built in the newer area of Prague 10, designed by renowned F1 architect Hermann Tilke, who designed world famous F1 circuits in Bahrain and China. The project is nothing if not ambitious: 2.3 kilometres in length with seasonal and year-round circuits, a new hotel, shopping centre, even a multi-purpose hockey stadium. 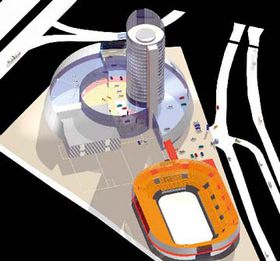 Project of Prague Sport&Car Centrum, photo: CTK But, is it a really a possibility? The mayor says "Yes", though for detractors the idea is not realistic. Certainly, if the circuit is built, it won't come cheap: already it has been attached to a 2.2 billion crown price tag - the equivalent of 100 million US dollars. But, there is at least one incentive: reportedly none of the investment would come from the city itself: all of it would be from private investors. If the project gets the green light, Prague could see shiny racing machines in around ten year's time. Radio Prague's Emily Udell asked a number of people on Prague's streets - both visitors and locals - what they thought of the idea:

British man: "Oh yeah, I think it'd be brilliant for Prague! Racing is superb! We often go to Silverstone whenever it's on, it's real good, fetch plenty of people in. Yeah."

British man: "We've all got too much of it already! Prague just seems too nice to have that as well: more fans, more pollution, more noise."

American man: "We live in California and they have a Formula 1 race in San Jose which is very close and puts a huge burden on the city. On the other hand, it brings a lot of money into the city also."

American: "Car racing. I think it's a waste of money and fuel and energy {laughs}. It's not my thing."

One Czech man too voiced opposition:

"There are already too many cars in the city! We don't need this kind of circuit!"

And he's not alone. Others, too, have voiced concern, namely those in the area proposed for the circuit who fear they would suffer noise and fumes in residences just 1.5 kilometres or so from the proposed site. There are other problems as well: some critics point to the fact that the Czech Republic's second largest city, Brno, already boasts an F1 quality track, yet even there the Czech Republic does not feature Formula 1 races. Last but not least, the circuit in Prague - at 2.3 km - is deemed by some critics as too short for its intended use, needing a loop of at last twice that length.

For now, its early days: the Czechs are facing an upcoming local election and it's possible that the circuit idea will remain just a pipe dream, intended to entice voters that will be forgotten once ballots are cast. On the other hand, if the project does gain wider backing and greater momentum, it is possible locals and tourists here one day will be able to see car racing in Prague.