City councillors in Prague have taken a significant step to try and curb disorderly conduct in the capital, passing an ordinance doubling the number of public areas where the consumption of alcohol will be banned. As of October 3, almost 860 spots in the capital will be off-limits for alcohol, including parks, areas near schools, and city squares. 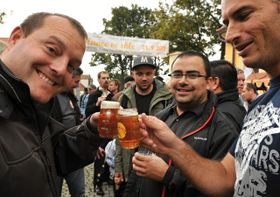 Illustrative photo: CTK Any given morning, shards of broken bottles on the Old Town Square or any number of Prague’s streets hint at revelry from the night before. City councillors, however, have now taken steps to curb revellers’ enthusiasm. As of next month, drinking in many public areas will no longer be tolerated after they doubled the number of areas in the city - including squares, streets, and parks, where drinking is banned. Popular destinations, such as Prague’s Dlouhá Street, where partying sometimes spreads curb-side, appear set to come under greater scrutiny, with offenders risking fines of up to 1,000 crowns.

“It will be up to the police to enforce the ban on alcohol. Areas where the problem is more ingrained we will put up signs pointing out that drinking in public is banned.”

A number of observers have welcomed the move, suggesting that tighter restrictions should on the whole be beneficial. A little earlier I spoke to Major Michael Stannett, the head of the Salvation Army in the Czech Republic: 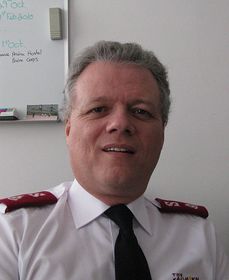 Michael Stannett, photo: archive of Radio Prague “The idea of having alcohol-free zones is probably a good one, particularly because you do have people who do drink too much and annoy others and can be anti-social in their behaviour. The new legislation will let people know that certain behaviour – really not acceptable anywhere – will be unacceptable in certain parts of town. I think it is generally a positive step acknowledging that the country does drink too much and that people can not behave or carry on in certain ways.”

At the same time, Major Stannett points out that the success of the changes could be limited: he does not expect them, for example, to improve the situation for those the Salvation Army most tries to help: people on the street, often handed the lion’s share of the blame in the public eye for disorderly conduct.

According to Major Stannett, people on the street are a small part of the problem, even if they are likely to openly ignore drinking restrictions.

“I wouldn’t solely lay the blame with people who are homeless. People who live on the street aren’t on the street because of their alcohol problems – there are a slew of other problems. They are drinking to try and lessen the pain of what they are going through.

“On the contrary, many homeless people often try to avoid society and behave timidly as a result. It’s true, some people get more aggressive when they have been drinking but generally I would say that more often we see such behaviour from your average student or family man who take it too far and smash a bottle in the street. That is the far greater side of alcohol abuse in the city centre than the people living in our hostels.” 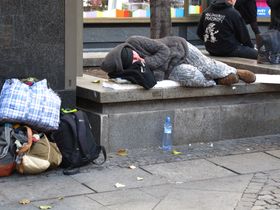 Photo: Kristýna Maková Even with tighter restrictions, boozing in public is not likely to disappear completely; how effective the ordinance proves will likely depend primarily on to what degree restrictions are enforced: it wouldn’t be wholly surprising if in some cases, as in the past, officers turned a blind eye. Even in the case of a 1,000 crown fine, some councillors have already called that too low, not likely to make merrymakers who have had a few – or one too many – think twice. The ordinance, meanwhile, still has to be approved at City Hall before coming into effect.