According to legend, Bohemian hops were so prized King Wenceslas ordered the death penalty for anyone caught exporting cuttings from which plants could be grown. But with beer consumption and pub visits down at home, big Czech brewers rely on exports to make up the difference, while trying to lure locals back with craft-style and limited-run beers. Photo: Pixabay, CC0 Public Domain Big breweries have long offset small profit margins at home through exports, which command premium prices. Yet many of the biggest names are in the red. Staropramen, for example, announced this week it lost 82 million crowns last year, in part due to “a significant drop in overall beer sales in the gastronomy sector”.

Beer remains the most consumed alcoholic beverage in the land that gave the world Pilsner-style lager. But fewer people are ordering it in pubs and restaurants, and overall numbers of regular beer drinkers have been steadily dwindling, as wine and other spirits have gained ground.

These are among the findings of the latest “Beer in Czech Society” survey by the Centre for Public Opinion Research (CVVM), which has been tracking the issue since 2004. It says six out of seven Czech men, and every other Czech woman, drinks beer on a regular basis.

Consumption of beer among Czech men is among the lowest registered in 14 years, suggests the survey, at 7.6 half-litres (pints), down than one half-litre from 2017. It has risen slightly among women, to 2.7 half-litres a week, due to the availability of specialty beers.

Surveys show big Czech brewers can no longer rely on pubs catering to regulars – štamgastovi. So, they are increasingly looking to imitate craft brewers, says Jan Šura, head of the Czech-Moravian Association of Mini-breweries.

“Big breweries, in fact, are using small breweries as a laboratory. They follow the trends on the market, what beers the small and micro-breweries are making and enjoying success with, and add similar ones to their own production.”

Mini breweries often try to compete on freshness and purity – offering unfiltered and unpasteurised craft beers. For their part, big players have responded by sending their own unpasteurised beer straight to pubs and restaurants.

There are over 430 mini brewers now in the Czech Republic, which all together account for about two percent of overall production. Initially, many concoct unconventional brews – for example, using seasonal ingredients – to appeal to connoisseurs. India Pale Ales, or IPAs, were big hits, with specialty beers aged in bourbon or whiskey barrels also popular. 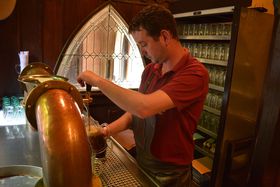 Photo: Ondřej Tomšů That said, small breweries often return to the roots of Czech beer tradition, by introducing ales or lagers with a strong regional identity. In this way, lines between big and small breweries are being redrawn, says Jan Šura.

“Mini breweries, after introducing something new and unusual, often return to the bedrock of beer – lager – and start paying far, far more attention to the quality.”

There has even been some crossover between big and small brewers. To mark the 100th anniversary of the founding of Czechoslovakia this past October, Plzeňský Prazdroj, makers of top Czech export Pilsner Urquell, teamed up with the small brewery Pivovar Matuška to create a special beer.