Czech children receive visit from St Nicholas and his companions

This Wednesday, December 5th, Czech children eagerly await the visit of the bearded St. Nicholas and his two companions – an angel and a devil. The much treasured tradition has been going strong for centuries and is unlikely to disappear any time soon. 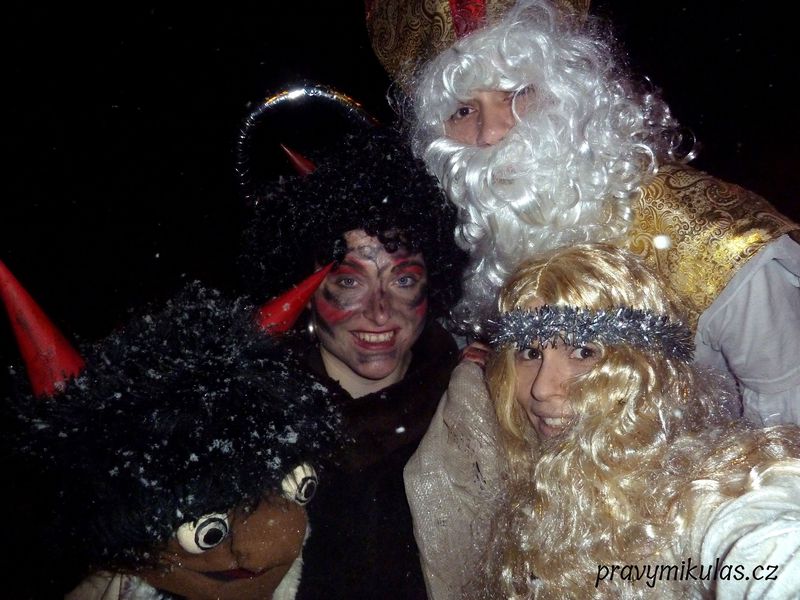 Photo: archive of Pravý Mikuláš ensemble Tourists in the Czech Republic right now may be confused by the sudden influx of saints, devils and angles touring the local streets. Yet this is not a passage from St. John’s Revelation and the Battle of Armageddon has not arrived. Rather, it is the annual tradition of St Nicholas visiting children on December 5th to find out whether they have been good or bad.

Martin Šimsa, from the National Institute of Folk Culture, explains how this type of celebration came about.

“This tradition is actually connected to visits that teachers would make to children, where they would check if they had mastered their learning material, specifically prayers. That was the main reason for the visits of St. Nicholas, to check if they know how to pray.” 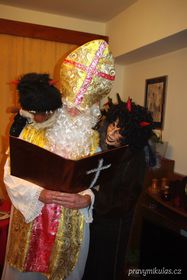 Photo: archive of Pravý Mikuláš ensemble The visits take place on the night before St. Nicholas Day, which is celebrated on December 6th. St. Nicholas starts by asking the children if they have been good, often requesting they perform a poem or song as a test.

Then Nicholas asks if the youngster has been naughty. Children are sometimes told that the devil standing next to Nicholas will take them to hell if they did, and many take it as a test of bravery.

However, the worst children have to fear is that they will receive some potatoes or coal that the devil carries in his sack, rather than the sweets and other goodies carried by the angel. Almost always, they receive the latter.

The tradition also engages students and young adults, who often volunteer to impersonate the three religious figures and tour their local neighbourhoods.

Eva Černá, is one such volunteer. In her professional life she is an architect, but on December 5th she joins with her fellow members of the Pravý Mikuláš, or “Real Nicholas” ensemble and visits families with children.

“Parents usually ask us to visit their children about a month ahead of the event, although sometimes we get reservations as early as the end of the summer. Everyone wants us to visit between five to six o’clock and we can’t divide ourselves up of course, so our tours stretch from the afternoon into the late evening hours.”

Mrs. Černá’s ensemble “Pravý Mikuláš” has also started to offer visits in English to foreign families living in Prague. Those interested can book on their website: www.pravymikulas.cz

The appearances of the various St. Nicholas’s and their companions also differ greatly based on the time and effort their portrayers place in preparing for the event. Those who do not prepare well enough risk that the children will see through the disguise.

While in most of the country the religious aspect has largely disappeared from the visits, in eastern Moravia, where faith remains relatively deep rooted, the tradition of children reciting prayers is still held on to. 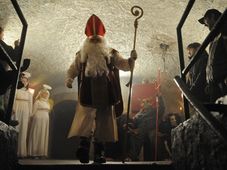 Wednesday evening - Mikuláš – the eve before Saint Nicolas’ Day – is being eagerly awaited by children around the country. Each year… 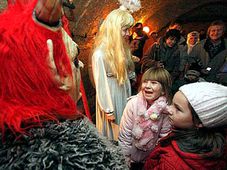 Why do Czechs celebrate “Mikulas”?

Wednesday night, the Eve of Mikulas or Saint Nicolas Day, is eagerly awaited by children all over the country. Each year on the night… 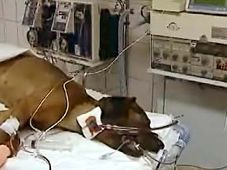 A first in Czech medical history - a dog gets kidney dialysis treatment! A fan at a boxing match gets a left hook from the referee…