Popular Czech liquor known as ‘tuzemák’ has once again come under the spotlight from authorities in Brussels. According to a report by the European Food Safety Authority, the chemical used to create the artificial rum flavour can be carcinogenic. Agriculture Minister Marian Jurečka says that if Brussels decided to ban the chemical, he is ready to file for exemption so that its use can be continued. Marian Jurečka, photo: Filip Jandourek A report by the European Food Safety Authority, EFSA, published in August concludes that rum ether, a chemical component used to create the typical rum flavour in Czech ‘tuzemák’, is carcinogenic and as a result is a safety concern.

The European Commission will now evaluate the information and decide whether the chemical should be banned from use in food and beverages across the EU.

In reaction to the news, Agriculture Minister Marian Jurečka said he wanted to negotiate with the European Commission and make sure that the amount of the flavouring contained in ‘tuzemák’ really poses a threat to human health:

“The report was assessing the chemical component as such, but we should focus on the amount that people usually consume and whether such amount is actually dangerous to human health. Only then we can decide what steps should be taken.”

The popular Czech liquor, which has been a staple of Czech baking and pub-life for over a hundred years, has already been the subject of a ruling from Brussels officials in the past. Originally called ‘tuzemský rum’ or ‘Domestic Rum’, it had to be renamed in 2004, after the Czech Republic’s accession to EU. Czech rum is produced from sugar beet spirit, but according to regulations only spirits distilled from sugar-cane can be called rum.

Despite its new name, the traditional liquor remains very popular with Czech consumers. Nevertheless, producers fear that the ban could hurt their business, which has still not fully recovered from the methanol scare scandal over bootleg liquor five years ago.

Jaroslav Burkart is head of Czech Union of Spirits Producers and Importers: 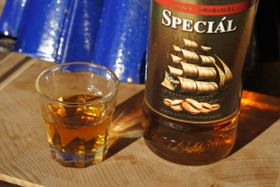 Photo: Patrik Rozehnal “We sell around about two million litres of Domestic Rum a year, which is around one fifth or one quarter of the overall sales of spirits in the Czech Republic. I don’t want to speculate about the outcome, but it would be a serious problem for us.”

Jaroslav Burkart also downplays the EFSA findings, suggesting that the chemical compound may not really pose any danger to consumers.

“The EFSA study doesn’t have any negative conclusion. The problem is that there is no proof that the ingredient is harmful. So I would say in this case administrative procedure has won over common sense.”

‘Domestic rum’ made from potatoes or sugar beet, has been sold in Central European countries from the former Austro-Hungarian Empire since the mid-19th century.