Finance Minister Andrej Babiš whose ANO party has topped public trust surveys for months and who was widely expected to become the country’s next prime minister is facing the most serious crisis in his political career. The billionaire entrepreneur who entered politics on an anti-establishment and anti-corruption agenda is suspected of having dodged taxes and influenced media coverage against his political rivals. 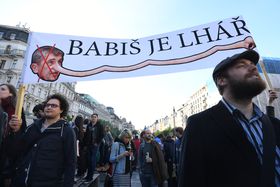 'Babiš is a liar', Wenceslas Square, Prague, May 10, 2017, photo: CTK Just a few weeks ago Andrej Babiš appeared indestructible. He topped popularity polls as the most trusted politician in the country and his ANO party had a strong lead over its political rivals. On Thursday the embattled finance minister was called on to explain his behavior to the lower house of Parliament and thousands of Czechs in Prague and other cities took to the streets to protest against his continued presence in the government. On Wenceslas Square an estimated 20,000 demonstrators called for his dismissal and their wrath turned also against President Miloš Zeman who has refused to fulfil the prime minister’s request to dismiss Babiš.

The finance minister’s refusal to resign and the president’s unwillingness to dismiss him precipitated a serious government crisis. On Wednesday a special session of the lower house debated the implications of three leaked phone recordings which indicate that Babis influenced media coverage in the Mladá fronta Dnes daily, which he formerly owned and was forced to put in a trust fund, to discredit his political rivals. The most recent recording released on an anonymous Twitter account suggests that the finance minister was privy to information from police files in a case still under investigation. The leader of the opposition TOP 09 party Miroslav Kalousek said the finance minister’s practices gave reason for the utmost concern. 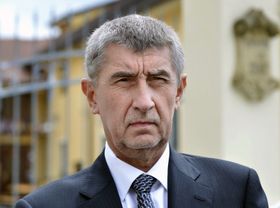 The revelation that Andrej Babiš handled classified documents relating to an ongoing police investigation has led the Christian Democratic Party of the ruling coalition to call for a meeting of the National Security Council, a request that the prime minister has said he is ready to comply with.

Meanwhile, Andrej Babiš, an increasingly isolated figure on the Czech political scene, is going down fighting. He claims that his finances are in perfect order and that he had been framed in speaking to the journalist in question about media content and political rivals. On Wednesday he told the lower house he would never resign of his own accord or leave politics in order to accommodate what he described as the corrupt establishment out to destroy him. But does he have a political future in view of the shocking revelations of the past few days? Political scientist Vladimíra Dvořáková says he is on very shaky ground. 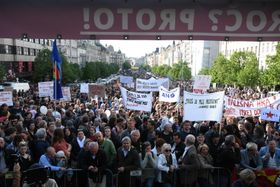 Wenceslas Square, Prague, May 10, 2017, photo: CTK “It is very difficult to predict what will happen, but it seems that mainly the fact that he tried to influence the newspaper coverage that he somehow tried to blackmail political rivals has changed the atmosphere in the society. Czech society was somehow very tolerant of his conflict of interest and with his populist appeal he got away with a lot of other things. But listening to how he spoke about his colleagues in politics and this likely attempt to use materials to blackmail politicians or influence politics is something that is less tolerable in the society.” 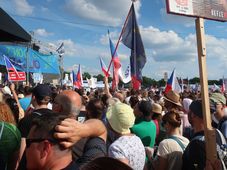