On Sunday, one of the most famous Czech folk singers, Jaromír Nohavica, received the Medal of Pushkin in Moscow from Russian President Vladimir Putin. Nohavica’s acceptance of the medal, which is awarded to citizens and foreigners after approval by Putin, has garnered controversy at home. 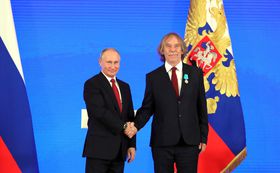 Vladimir Putin, Jaromír Nohavica, photo: ČTK/kremlin.ru “Thank you. For me it is a great honour”, said the popular Czech singer and songwriter Jaromír Nohavica as he accepted the Medal of Pushkin from President Vladimir Putin for his “merits in the area of consolidating friendship among peoples” in the Kremlin on Sunday, during the country’s Unity Day celebrations.

However, the artist’s acceptance of the award, which has to be personally approved by Putin, has met with criticism both in the Czech Republic and Poland, where he also has a large fan base. It is not the first politically controversial act Nohavica has done recently. In 2017 he let himself be photographed with the anti-migrant politician Tomio Okamura, saying the latter was “sympatico” and, later that year, accepted a decoration from Czech President Miloš Zeman, whose award choices have sometimes divided opinion.

Music critic Pavel Klusák explains why Nohavica is an attractive choice for the Kremlin.

“Lately his ideas have become increasingly political. For example, the political server virtually.cz [an alternative news outlet] produced and released his songs for three years. Nohavica has also started incorporating xenophobic and collective responsibility themes, whether it is Roma violence against ‘whites’ or anti-EU songs. It is exactly this sort of cocktail of a popular folk personality and political statements that make him useful to politicians and he welcomes their favour.”

The Pushkin Medal for achievements in the arts, humanities and other areas of culture has been awarded since 1999. Other Czech recipients include Václav Klaus, who received the medal from the Russian president in 2007, and Jiří Klapka, the head of the Czech-Russian society in the Czech Republic.

Despite his confession of having partly collaborated with the communist-era secret police, Jaromír Nohavica has been a much-loved figure in the Czech Republic. His songs have become part of the fabric of Czech culture and are frequently performed around campfires.

But with his recent association with the world of politics, the musician’s role has now changed, suggests Pavel Klusák.

“It is said that disinformers and manipulators need a mix of truth and lies to get what they want. Artists such as Mr. Nohavica are useful to them at the moment. Music critics such as I do not want to judge them. We want to review albums, songs and mention their role in society. However, proudly accepting an award from Mr. Putin creates a real problem in the Czech Republic. That is why we can no longer just talk of Jaromír Nohavica as a songwriter.”