NATO foreign ministers concluded two days of talks in Brussels on Wednesday focussing on issues such as the INF Treaty, the crisis in the Sea of Azov, stability in the Western Balkans and Afghanistan. The Czech Republic was represented by Foreign Minister Tomáš Petříček. 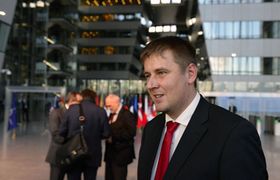 Tomáš Petříček, photo: ČTK/Jakub Dospiva The opening day of the summit was dominated by a debate on the future of the Intermediate-Range Nuclear Forces Treaty which is at risk of being abandoned, due to the fact that Russia has developed and fielded a new ground-launched cruise missile system that violates the INF.

US allies in NATO said Tuesday they "strongly support the finding of the United States that Russia is in breach of its obligations" while Washington is respecting the treaty, and called on Russia to come back into compliance with the INF. Foreign Minister Petříček said there was unanimous support for the US stand.

“It is quite clear that Russia is not meeting its obligations stemming from the INF treaty and it is unthinkable that one party can continue to violate the agreement, while the other adheres to it. At the same time NATO allies want the disarmament process to continue and this treaty is one of the pillars of this process.”

The United States warned Russia on Tuesday it has 60 days to start complying with the nuclear missile treaty or Washington would abandon the pact, raising concern about Europe's future security. NATO Secretary General Jens Stoltenberg warned that the allies must start to prepare for a world without the treaty.

Foreign ministers also met with their colleagues from Georgia and Ukraine. They stressed the alliance's strong political and practical support for both countries, especially in the face of continuing aggressive actions from Russia. In a tweet reflecting the mood at those meetings Foreign Minister Petříček wrote:

“Russian aggression and hybrid methods in eastern Ukraine, the Sea of Azov and Georgia undermine European security. We cannot be and will not be indifferent to such things. We must send a clear signal we will not tolerate Russian actions. We have to bolster our defence capabilities and help Eastern Partnership allies that are most exposed to Russian pressure.” 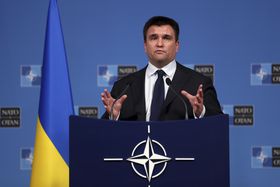 Pavlo Klimkin, photo: ČTK/AP/Francisco Seco In a one-on-one meeting with his Ukrainian counterpart Pavlo Klimkin the Czech foreign minister said his country stood by Ukraine at this difficult hour. He said the best counter-offensive to growing Russian pressure was a strong, democratic and prospering Ukraine.

The Czech foreign minister also welcomed the debate on the Balkans, focussing on accession talks with Macedonia, which he said he hopes to see concluded by 2020, the elections in Bosnia and Herzegovina and Russia’s influence on the region.

The two-day summit concluded with a meeting of ministers whose countries are contributing to NATO's Resolute Support Mission in Afghanistan, in which officials reaffirmed their commitment to working for Afghanistan's long-term security and stability. Minister Petříček noted that despite the loss of Czech lives in Afghanistan this year the Czech Republic would continue to meet its obligations and remain a reliable partner to its allies.