The Czech Republic will take no more migrants from Italy and Greece shared out under the European Union’s quota system. Following a cabinet meeting on Monday, Interior Minister Milan Chovanec called the existing allocation system dysfunctional and cited the worsening security situation. To date, the country has taken only 12 refugees but was to have taken in around 2,600 people. Milan Chovanec, photo: CTK The Czech Republic has opposed refugee quotas from the very start but was to take more than 2,000 people in the one-off mechanism of quotas set to end in September. Instead, the country has taken in just 12 and rejected any notion of taking any more: Interior Minister Milan Chovanec made the announcement on Monday making clear that the current security situation had contributed to the decision.

“In June or July the European Commission will begin taking measures against countries that have not taken in at least one percent of their quota. The agenda item was handled by the government as ‘secret’ but the outcome is being made public. I want to tell the public that the government opted to stop its role within the allocation system due to worsening security and the dysfunctionality of the whole project.”

The interior minister had telegraphed his negative stance on the issue already in May and the government took the decision despite the risk the country could be fined. Tens of millions of euros and stressed that the decision was a direct response to the EU Commissioner for Migration and Home Affairs Dimitris Avramopoulos.

Since May 2016, Czechs have not offered resettlement for any refugee within the EU programme that planned the redistribution of 160,000 migrants among member countries. By mid-May, only about 18,400 people had been resettled within the programme. According to a recent report, the Czech News Agency noted, approximately 12,400 migrants have been waiting in Greece to be re-distributed. 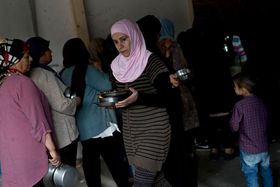 Ritsona refugee camp, Greece, photo: CTK Rather than meeting the pledge to take in 2,600 refugees, Czech leaders have now repeatedly shown they are considerably more comfortable discussing broader security steps. Prime Minister Bohuslav Sobotka outlined some of the issues ahead of a top-level meeting in Prague later this week, which will include the arrival of the head of the EC, Jean-Claude Juncker and Federica Mogherini, the High Representative of the European Union for Foreign Affairs and Security Policy. The Czech prime minister:

“On Friday, Prague will host a conference on European security - a debate which was launched following Brexit. We are aiming to discuss the ways Europe can be more effective on defence and security issues.”