The government of Prime Minister Andrej Babiš (ANO) has, as expected, survived a no-confidence vote in parliament. Ninety-two MPs voted for the measure, 90 voted against it, and 18 abstained. To pass, 101 votes were required. 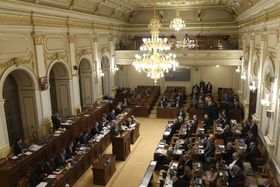 Chamber of Deputies, photo: ČTK / Ondřej Deml The vote took place after over seven hours of at times heated and emotional debate. It was called by the opposition due to fraud allegations against Mr Babiš involving EU subsidies, triggered by an interview his son gave claiming he had been “kidnapped” so he would not talk to investigators.

Mr Babiš’s coalition partners, the Social Democrats, skipped the vote to allow the government to survive. But they want Mr Babiš to resign. He is refusing to do so, telling lawmakers in an emotional speech before the vote:

“I have no reason to resign... You either have to dismiss me or try to defeat me in free, democratic elections. You cannot get rid of me in any other way than through the one based on the will of the citizens.” 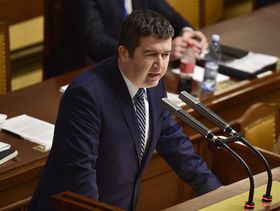 Jan Hamáček, photo: ČTK / Roman Vondrouš Mr Babiš condemned what he called the “lies” being spread about the kidnapping or coerced disappearance of his son, Andrej Babiš Jr., who he says was in Russian-occupied Crimea at the time in question of his own free will.

Mr Babiš called the whole thing a “pseudo-affair” and again accused journalists of exploiting his son’s psychological condition to obtain what he called “a false and unethical report.”

Earlier in the week, Social Democratic party leader Jan Hamáček said it would be best if the prime minister stepped down.

“The prime minister’s personal problems are burdening the government and we lobbied hard for a change of prime minister, but the ANO party is categorically against that. So by abstaining from the vote we are acknowledging the problem, but our priority is to continue in this government and to implement our policy programme”, Hamáček said. Andrej Babiš, photo: ČTK / Ondřej Deml The only way to bring about a change of prime minister, Hamáček said, was via a motion to dissolve parliament and hold early elections, which his party was ready to support if 120 votes could be found for such a solution in the lower house.

Mr Babiš’s ANO party remains the most popular. A survey published on Friday by the pollster CVVM show ANO would win elections now with about 30 percent of the vote. However, that poll was conducted before the current crisis peaked and so does not fully reflect its potential impact on party preferences, CVVM said.

A separate poll by the Median agency taken last week showed that most Czechs (57 percent) believe Babiš tried to keep his children from testifying in the corruption case against him over EU subsidies to the Stork’s Next complex. 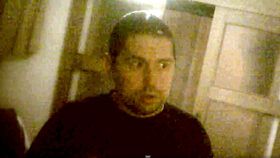 Andrej Babiš Jr, photo: Seznam.cz, Vít Klusák, Filip Remunda The poll was taken after the publication of an interview on November 12 with Andrej Babiš Jr, who said he had been “kidnapped” and taken to Crimea because his father wanted him to “disappear” while the investigation into EU subsidy fraud was underway.

Mr Babiš says his son, who now lives in Switzerland, is mentally ill and that the allegations are nonsense. The prime minister also says his daughter is bipolar and so her testimony would be unreliable.