A long-standing dispute between players and owners in North America's National Hockey League came to a head on Thursday when the league locked-out players on a day they would have normally started training camp. The dispute has put the regular season — as well as next year's Stanley Cup play-offs — at threat, and as a result many European players have returned home to play in their national leagues. 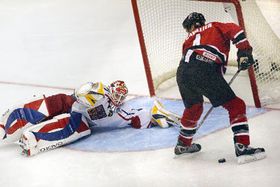 Czech goalie Tomas Vokoun and Canadian Vincent Lecavalier, photo: CTK In the Czech Republic, fans too will be able to see some very big stars playing on home ice. To find out what the latest developments meant for Czech fans Jan Velinger spoke with Pavel Barta, a Czech hockey official and editor-in-chief of the website www.hokej.cz

Who are some of the players who are attracting attention at this time?

"Of course Jaromir Jagr, who signed with Kladno, Milan Hejduk, who signed with Pardubice, Patrik Elias possibly playing for Znojmo; he was the best Czech in the NHL last season, and Znojmo will also have Tomas Vokoun. All of them played at the World Cup of Hockey last week."

You mentioned Jaromir Jagr, have you had a chance to talk to any of these players and if so, do they feel nostalgic about playing for their original teams?

"Uh, they were looking forward to it, I spoke to Martin Straka who I forgot to mention who will be playing for Pilsen, which was his old team, where he grew up, and he's looking forward to it. I think they all are. It might be interesting how they get used to "European hockey" bigger rinks and rules, it might now be a little bit different game for them."

There is another player about whom there was a lot of speculation and that was that [Canadian] Vincent Lecavalier might come and play for Sparta Prague. 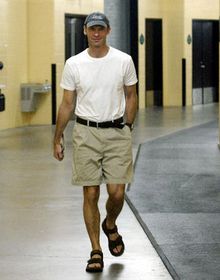 Dominik Hasek, photo: CTK "Yes, there was a rumour some time ago and it's still alive. It would be interesting if Lecavalier played for Sparta, considering he killed the Czechs last week at the World Cup in the semi-finals. For now, though, nothing has been confirmed. The only foreigners at the moment are Ziggy Palfy and Jozef Stumpl, who will play for Slavia Prague."

Finally, what about one last famous Czech hockey player none other than goaltender Dominik Hasek? Was there ever any chance he might return home to play?

"No, Dominik will be playing in the AHL - the American hockey league - for now. He wanted to keep base with American-style play, so, no, there was never any real possibility of him returning to play in the Czech league."