In the Czech Republic, ice hockey – not football – is arguably the national sport. Hockey has been a part of the culture since the days of the Austro-Hungarian Empire, with the first league founded 110 years ago. With traditions running deep, it’s no wonder opinion is so passionately divided over the design of the new Czech Ice Hockey Association jersey. 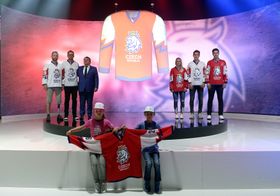 Patrik Eliáš (second from left), David Rittich (right), photo: ČTK/Šulová Kateřina “I really like the design. But the first moment I saw it … Well, everyone is used to the Czech coat of arms as the logo. And then all of a sudden there’s something new. And then they stop and realise, oh, it’s a lion. So, when someone sees it for the first time they maybe have to think about it. But when they realise what it means, they’ll understand and definitely like it.”

That was goaltender David Rittich, who has just been extended an offer to play for the Calgary Flames, an NHL franchise. As the Czech national hockey team goalie, he was on hand for the unveiling of the new jersey last week – and interviewed for a Czech Hockey campaign clearly aimed at winning over diehard fans of old strip.

The design has changed at least a dozen times over the past century, adding a prominent Soviet red star in the 1950s, switching to a minimalist design in the 1960s with no logo, just the letters ČSSR, for the Czechoslovak Socialist Republic, only to see the star return in the 1970s. The one constant, naturally, is that it features the national colours – white, red, and blue.

But since 1993, the Czech coat of arms adopted on a state level the year before has featured front and centre. It incorporates the symbols of the three historical regions comprising the “Czech lands”: Bohemia’s silver double-tailed lion set against a red background; Moravia’s red-and-silver checkerboard eagle with a blue background; Silesia’s black eagle with a white crescent against a yellow background. 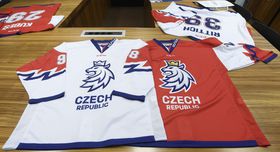 Photo: ČTK/Deml Ondřej All that is gone now with the new design – a stylised illustration of a white lion wearing a gold crown, which some detractors say looks cartoonish. Even some players have gone on record as against it: right winger David Pastrňák said he didn’t understand and goaltender Ondřej Pavelec called it a disgrace. Supporters argue it looks rather flash, like many NHL team jerseys. Now retired ice hockey great Patrik Eliáš of New Jersey Devils fame, who also appeared at the unveiling, said he quickly warmed to it:

“What I find most interesting and like best is that the lion has a puck in its mouth. At first glance, people probably won’t notice it. In some colour versions, it may look like a tongue… But I think it’s a great detail and connected to hockey, of course. ... The lion is characteristic of the Czech nation. It’s great to have one as a symbol of our national team. For me, it’s a hunter taking aim at his prey.”