Internet firms have appealed to the country’s prime minister, Bohuslav Sobotka, to halt plans for a new military intelligence bill which would give Military Intelligence more powers to police the internet. The government is seeking to bolster cyber security in the Czech Republic but critics worry the bill would give too much power to a single entity.

Ondřej Filip, photo: archive of CZ.NIC I spoke to Ondřej Filip, the CEO of CZ.NIC, administering Czech domain names, who is critical of the idea.

“I don’t think it is really necessary, if you want to protect the country, to wiretap all the communication, which is what is written in the bill. They want to install either passive or active devices into networks, which creates a bunch of problems regarding privacy and security itself. Installing some devices, under single control, into all networks, creates a new vector of attack instead of better security. The attacker does not have to hit all different attackers but can focus on just one organization and if he or she succeeds than they can hit all the networks. So it creates a target and we do not think this is the right way to protect the country.”

How is it possible that the danger of that is not obvious? It seems, from what you are saying, that it is not the best idea…

“Well, I am afraid that they really believe that one state or government-controlled organization can provide better security than private organizations running the networks and I have to say I strongly disagree. Military Intelligence never had this responsibility, we don’t know much about their expertise of course, but from what the head of the agency said, they want to hire new people, so I don’t think they are ahead of the commercial sector, which is why I am afraid to leave it just up to them.”

What for you is a viable solution or alternative? Would it be cooperation, a sharing of information on cyber security? 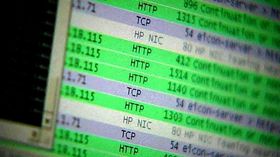 Photo: Czech Television “Absolutely. I think that operators should cooperate more together and with the government and can strengthen security and improve the current standards: all that is possible. I think it is necessary to maintain the heterogeneous nature in the network in the Czech Republic and that it should not be left to any one entity.”

Nothing is set in stone yet, the matter is still up for discussion and debate? Are you confident that elements of this proposed bill can still be changed or thrown out?

“I am definitely not confident but I have good faith when the prime minister said the proposal had to be reconsidered again, that he wanted to talk about the law with different parties, so hopefully the proposal will be amended in a way that is better for this country.”