The Czech Republic’s Karolína Plíšková has achieved the greatest moment in her career to date by becoming world women’s tennis number one. Her success comes after another player’s results at Wimbledon went her way, but Plíšková says topping the rankings proves her consistency this year. 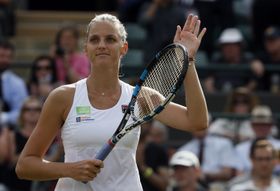 Karolína Plíšková, photo: CTK When the new women’s singles tennis rankings are published immediately after Wimbledon, there will be a brand new name at the top: Karolína Plíšková.

The 25-year-old from north Bohemia – who has never won a Grand Slam title – was herself knocked out of Wimbledon in the second round.

However, she will climb from third place after Simona Halep blew her chance of leapfrogging current number one Angelique Kerber by losing in the quarter-finals at the All England Club on Tuesday.

Prior to that match, Plíšková spoke to Czech Radio about reaching the top of the rankings.

“Not everybody achieves it. You won’t get there with average results. There are a lot of players and I would say it’s very difficult to get there. I don’t want to put it at the same level as a Grand Slam win, but it’s just behind that. But it does point to 12 months of solid performances. Some players are excellent for one or two tournaments but you really have to be consistent for the whole year.”

Vladislav Šavrda is a former non-playing captain of the Czech Davis Cup team. He had this to say in response to Plíšková’s sensational news. 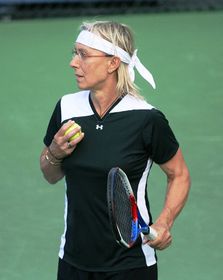 Martina Navratilova, photo: Robbie Mendelson, CC BY-SA 2.0 “Karolína has won four big tournaments this year and her performances have shown great consistency. Some begrudgers are saying that she only got there because Serena Williams is expecting a baby and Sharapova and Azarenka aren’t playing. They can say what they like, but the truth is that year-long consistency shows quite impartially who is the best player, and at this moment it is Karolína.”

Plíšková is the first player from the independent Czech Republic to reach number one and the first Czech-born player to do so since the all-time great Martina Navratilova. Vladislav Šavrda says the two can’t usefully be compared.

“Karolína has a very clear head. She has great strokes and excellent tennis technique. She obviously capitalises on the fact that she’s a tall player with a very good serve. Martina played rather differently. She was left-handed and played the kind of service and net tennis that was common in her day but is no longer practised today. Karolína benefits from having a powerful stroke and relatively good foresight.”