Over 90 percent of books in the Czech National Library printed after the year 1800 are threatened with destruction caused by acid, which has been forming in the paper over the years. The library has now taken a major step to prevent the valuable volumes from turning to dust, sending several thousand of them to Germany to undergo special chemical treatment, called de-acidification. 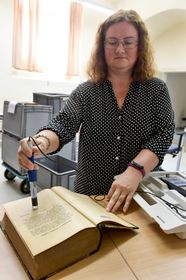 Measuring the PH level, photo: ČTK/Roman Vondrouš On Wednesday, 3,800 volumes from Prague’s Klementinum, which translates into over 2.2 tonnes of paper, were loaded on a truck and shipped to a special chemical treatment facility in Germany, which will neutralize acids in the paper so as to prevent it from disintegrating. The Czech Ministry of Culture has earmarked six million crowns for the project.

Martin Kocanda, head of the National Library, outlines the process of de-acidification, which can increase the books’ lifespan by several dozen years:

“The acidic paper has to be soaked in a special solution, which neutralizes the acids contained. What we need is to create a reserve of alkaline substance in the paper for the future, because the acidification process in books printed after the year 1800 will continue.”

Until the end of the 18th century, most paper was made of flax or cotton fibres that required little chemical treatment. This kind of paper has often survived for hundreds of years without decaying.

But roughly since the mid-1900s, papermakers started using fibre extracted from wood, which was much cheaper and more widely available than flax or cotton. However, it also required chemical treatment, which made the paper prone to accumulating acid over time and therefore becoming less resistant.

To select which books should first undergo the de-acidification process, experts from the National Library measured their PH level. Those with the lowest levels were the ones most threatened with disintegration.

The first shipment of books, amounting to 2.2 tonnes, is set to return to the Czech Republic in October. By the end of the year, some 4.6 tonnes of books will have been through the process.

The books are being sent to Germany since there is no such facility in the Czech Republic. That will hopefully change in the future, as Mr Kocanda explains. 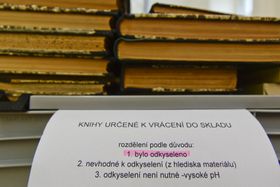 Photo: ČTK/Roman Vondrouš “Right now the only possibility to save the endangered books is to cooperate with our partners abroad. The National Library has been considering building its own facility, in cooperation with our colleagues from Slovakia, which would cover the needs of both countries. That could make the whole process and planning much easier and we could also treat larger amounts of books.”

There are currently over seven million books in the depositories of the National Library printed after the year 1800. According to experts, about 96 percent of them will need to be de-acidified.

Without such treatment, a book printed on wood-based paper typically survives for around 50 years before becoming too fragile to handle. 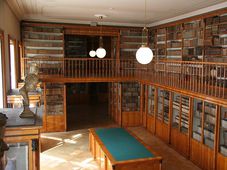 One of the city’s most precious book collections is to be found in the Nostitz Palace Library in Prague’s Lesser Town. The Early Baroque building,… 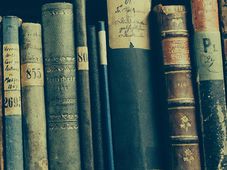 Over the past year and half, the Czech National Library has been carrying out a unique research project documenting books confiscated…