A Czech noble has weighed into ongoing talks about whether the Czech state should sell one of Prague’s Baroque architectural masterpieces to its current tenants: the German embassy. For the Germans, the building is more than a 17th century architectural jewel, it is also part of their recent history. 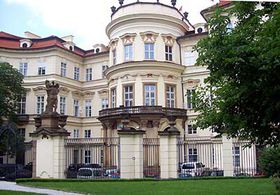 The Lobkowicz Palace West German foreign minister Hans-Dietrich Genscher on September 30th 1989 announced to the thousands of East Germans who had occupied the Prague embassy building and gardens in the previous weeks that they could travel to the West.

That moment came around five weeks before the fall of the Berlin Wall. But the occupation of the Prague embassy by those refugees had already become symbolic worldwide as evidence that the East German regime was crumbling fast.

Now the German embassy housed in the splendid Lobkowicz Palace is the centre of attention again after German Foreign Minister Guido Westerwelle earlier this week repeated his country’s keenness to own the building. Mr. Westerwelle underlined that it has an historic significance which few other buildings in the world can rival. 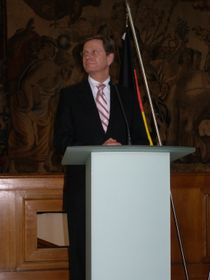 Guido Westerwelle An outright sale of the palace by the Czech state or an exchange for the former US embassy building in Berlin, a concrete monster from the 1970s, has been mooted.

But the sale is a sensitive issue for the Czechs. Foreign Minister Karel Schwarzenberg cautiously remarked during the meeting on Monday with his German counterpart that the embassy building should not become a bone of contention between the two countries.

But that is apparently what it is in fact becoming. One member of the noble family that built the palace and owned it until its sale in 1927 to the then Czechoslovak state has now spoken out. 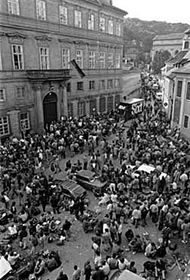 The German embassy in September 1989 Jiří Lobkowicz, of the Mělník branch of the noble family, slams the idea of a sale or exchange: “I do not think it is necessary that the Czech state sells the palace to the German state or in any exchange or whatever kind of transaction. I personally think that this house has a long history and I hope it will be a long history. And the history was linked with Czech history and the history of my family. And I would be, I would say, very openly against any purchase or exchange by the German state.”

Mr. Lobkowicz says he has not spoken with his cousin, the Czech foreign minister, about the matter. But he is convinced in any case that a rising tide of opposition to a deal with Germany will keep the palace in Czech hands. 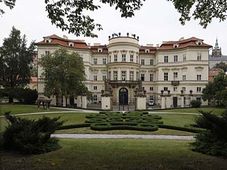 The German Foreign Ministry wants to acquire Prague’s Lobkowicz Palace, the seat of the German embassy. For thousands of East Germans,…