Not since 2013 has a seated Czech president addressed the nation on New Year’s Day: the current head of state, Miloš Zeman, has taken to delivering an address on the day after Christmas. This year, for the first time, the heads of both houses of parliament have taken up the mantle, calling for greater civility in 2019. 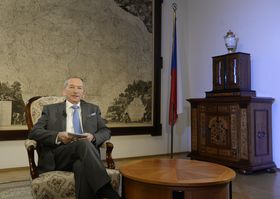 Jaroslav Kubera, photo: ČTK/Kateřina Šulová Senate chairman Jaroslav Kubera of the opposition Civic Democrats and his counterpart in the lower house of Parliament, Radek Vondráček from the ruling ANO party, both delivered speeches broadcast on New Year’s Day in what may well become a new political tradition.

The lawmakers’ speeches aired back to back on public radio and television, with Senator Kubera, as the second-highest ranking political figure under the Czech constitution, first taking the mic. Both spoke of the need to follow “the Golden Rule” as set down in anicent texts from the Bible to the Code of Hammurabi – do unto others as you would have them do unto you – and called for greater civility in the public and political spheres, alluding to growing division in Czech society.

“Our country is full of amazing, mostly unknown people. But what we lack is greater humility and, at the same time, greater self-confidence. Greater humility and respect for the work of others rather than the notion our work is the most important. …”

“There is a lack of self-confidence and belief in our ability. We are incredibly skilful, paradoxically in part due to the totalitarian era. I know no other country where a violin virtuoso or surgeon would build a house with his own hands.”

“On the other hand, magic words like ‘good day’ or ‘thank you’ have almost disappeared from our vocabulary. Social media networks are full of anger and hatred. Even discussion of Christmas fairy tales releases a wave of hatred.”

MP Vondráček – quoting the likes of Churchill and Lincoln on the nature of democracy itself – at times messy and maddeningly slow moving – also lamented that personal attacks and even threats have become a regular part of debate; and that the Czechs’ hard-fought right to freedom of speech should not be abused in such a manner. 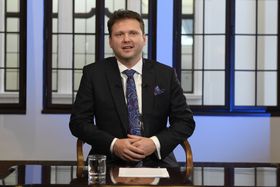 Radek Vondráček, photo: ČTK/Ondřej Deml “Democracy not only allows for but directly requires the voicing of different opinions, of criticism and debate. Above all, it requires dialogue. But I mean a dialogue underpinned by rational arguments and motivated by mutual respect and goodwill. Dialogue that is calm, not laced with excessive emotion and hateful attacks. After all, a person in the right has no need to raise their voice.”

“Democracy is not a boxing ring. We can remain decent people even when protesting in the streets. Vulgarity, personal insults, racism, threats – these do not belong to democracy.”

Apart from calling on Czechs to take to heart the “live and let live” ethos, Senator Kubera took a more partisan tack than did his counterpart in the lower house, among other things calling on the state to be as uninvolved in the private lives of the people as possible and criticising specific policies, such as the new EU privacy regulation and a ban on smoking in pubs and restaurants, which he says infringe upon personal freedoms.

The Speaker of the Czech Senate Miloš Vystrčil will lead a trade mission to Taiwan in August, he announced at a press conference on…

The #MeToo movement and the Czech Republic

How do Czechs feel about #MeToo, the movement against sexual harassment and assault which has brought related crimes into international…