The Czech prime minister appears to have forged a unified front across all parliamentary parties concerning Prague’s priorities when the phoney war stops and the real battle begins over the shape of the deal when Britain leaves the European Union. Defending Czech citizens’ rights in Britain and keeping the doors open to Czech exports are the main goals parties have agreed upon. 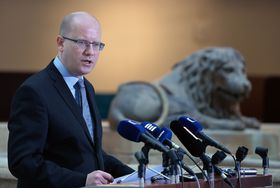 Bohuslav Sobotka, photo: CTK The Czech Republic has some experience of divorce proceedings. There’s the break up Czechoslovakia almost 25 years ago with most people now agreeing that it was probably for the best though many didn’t at the time.

But the proceedings can result in damage and bitterness on both sides. And that’s certainly what the Czech Republic would like to avoid in the intense negotiations that will take place over the next two years as Britain extracts itself from the European Union.

Prime Minister Bohuslav Sobotka called heads of parliamentary parties together on Wednesday to get a common Czech position over Brexit when Prague contributes to the common EU negotiating line that will be adopted over Brexit. That line should be agreed by European leaders and should direct the European Commission negotiators.

Mr Sobotka underlined the importance of that unified Czech stand:

“I think that this should without doubt reinforce the position that we should have at the European Council and will give greater weight to what the Czech Republic will propose for the negotiating process.”

The united Czech line should be preserved by regular meeting of a working group composed of top party leaders. They will also be consulted on another aspect, what sort of reformed EU should emerge from this divorce. Here, agreement might not be so easy to find.

And the two themes that will be central to the Czech position are defending the current rights of the tens of thousands of Czechs now living and working in Britain and safeguarding its exporters’ access to Britain.

As a whole, Britain is now the third biggest export market for the Czech Republic accounting for around 5.0 percent of its total sales abroad. For some sectors, such as the car market and engineering production, it is a crucial market with the future of Czech firms and jobs in the balance if a deal keeping that market access is not achieved. Prime Minister Sobotka again:

Photo: portalgda via Foter.com / CC BY-NC-SA “This is not just about the fates and rights of a few million citizens in Britain and the rest of Europe but also of those employees who are dependent for their jobs on the fact that they produce goods for or provide services between here and Britain. So, it’s about safeguarding jobs not just in Britain but also in the Czech Republic.”

The British government has said that the official launch of the Brexit process should begin by the end of March. It looks like being a very intense and complicated negotiation that might have to be compressed into as little as 18 months given the demands of the ratification process. And the Czech prime minister advised both sides on the future negotiating table to maintain a traditional British cool.