There’s little doubt that the European Union has gone through a lot of turbulence over the past few years and has scrambled to come up with new policies as a result. But the outgoing Czech prime minister believes it has boosted the country’s reputation in these difficult times and cast itself as a reliable and steady partner. 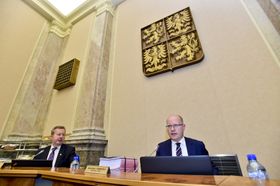 Richard Brabec and Bohuslav Sobotka, photo: ČTK Czech prime minister Bohuslav Sobotka has been conducting a series of ministerial visits and evaluations as his government draws to a close ahead of October’s parliamentary elections. His government had a broadly pro-European stance when it took office in January 2014 and little expectations of the tests that it would face from the immigration crisis which started a year later and the broader debate about the shape of the EU that would follow the Brexit earthquake in mid-2016.

The strains have toughened the stances of many countries and created rifts – some of the clearest between the Visegrad countries of Central Europe and the EU’s tradition leading duo, France and Germany, with little room for fence sitting.

Prime Minister Sobotka, flanked by European Secretary of State Aleš Chmelař, said on Thursday that Prague had come through the turbulence with a reputation as a constructive, reliable and respected partner of other European countries.

"We are one of the most active European countries which through its efforts has been trying to ensure that Europe can deal with the problem of illegal immigration. I am also pleased that for this whole period the Czech Republic has been a comprehensible and reliable partner and that we have strengthened our position within the European Union.ʺ

Beyond its traditional regional partners, the Czech prime minister said relations had been strengthened with Germany, France, Italy, Sweden and other countries. Aleš Chmelař, photo: Archive of Czech GovernmentChmelař was a bit more circumspect in his evaluation, admitting that disagreement had erupted over some European policies, but, he said, the Czech line was always clear and understandable to other countries which had not been the case in the past.

And Chmelař stressed the Czech Republic has been and is one of the most active countries in pushing for a stronger and re-shaped European defence policy.

ʺOver the last year on security and defence policy, Europe has pushed ahead more than in the previous 40 years. The progress is visible and significant and we hope that in the coming months the new direction in European defence policy will be clear."

Sobotka and Chmelař said Prague had also helped to push the debate about European social and economic convergence up the EU agenda, put the spotlight in Brussels on dual qualify food products, and helped to pave the way for a future Czech government to take a decision about joining the single European currency, the euro.

Another event also took place across Prague at the same time as the evaluation press conference, representatives of six parties took part in unveiling a giant European flag to demonstrate where they stand. Missing were representatives of some of the biggest Czech political parties tipped to pick up seats in the upcoming elections.