The final days of World War II remain among the bloodiest that Czechs can remember - with countless atrocities against civilians committed by the Nazis even as the Czechs rose up against them. In the Pelhrimov region, just days before the end of the war, German forces swept into the village of Leskovice, killing twenty-five people, and razing the village to the ground. No one was ever punished for the atrocity. What's more, research by a Czech investigative reporter has reportedly shown that the man responsible for ordering the massacre - former SS officer Walter Hauck - is still living in Germany today, a free man.

SS officer Walter Hauck TV Nova reporter Standa Motl has long earned a reputation for being one of the most dogged investigative reporters on the Czech scene, to date uncovering the whereabouts of a number of wartime criminals, whose atrocities in the Czech lands have long been forgotten and gone unpunished. This week, three new cases came to light, including that of German SS officer Walter Hauck, said to have ordered the destruction of the village of Leskovice, in the Czech-Moravian highlands. Czech police, Prompted by Mr Motl's work, have opened investigations into the wartime case, and are looking into Mr Hauck's whereabouts: the question is whether at this late date he can still be brought to trial.

One man convinced Hauck should face justice, at any cost, is 88-year-old Stanislav Pech. A Leskovice native who took part in the Czech Uprising, he was just 22 when Leskovice was destroyed on May 5th and 6th, 1945.

"It began at 16:30 on May 5th: we had been fighting against the Germans and had taken refuge in nearby forests. But, when fighting ended in the evening some who had fled from the village in terror returned, thinking the Germans had left and would not come back. But, the Germans did return, with reinforcements, at 4 a.m."

What happened next was something no one who survived could ever forget.

"They began murdering civilians at the bottom of the village. One family - a husband, his wife and two daughters -- were tied up with wire while their home was set alight. They burned to death. Another person killed was 13-year-old Pepik Vaverka. Usually those who paid the highest price were those who said 'We didn't do anything'."

Mr Pech's own father was one of those murdered and there is no doubt in Mr Pech's mind who was to blame.

"Hauck wasn't at Leskovice but he put out the order for the massacre. We know a witness saw an underling report to Hauck afterwards confirming his order was met. You ask about justice? All I can say is: 'death for death'. I can't say more."

How the case develops and whether Czech justice will be able to get Mr Hauck to court is now an open question. After the war Hauck was sentenced to death for crimes in France, but his sentence was rescinded. It seems unlikely that Hauck - today an elderly man of reportedly ill-health - will ever have to answer for what happened at Leskovice, Czechoslovakia, in 1945. 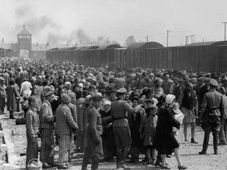