Moves by Czech election winner Andrej Babiš to put together a minority government drawing on experts and support where he can outside the ANO party have taken another step forward. But Babiš’ plans have also sparked opposition from most other parties and one idea for stopping them dead in their tracks. 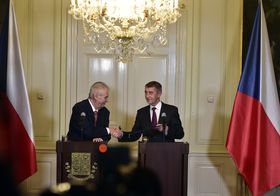 Miloš Zeman, Andrej Babiš, photo: CTK It could hardly have been more chummy between Czech election winner Andrej Babiš and head of state Miloš Zeman at the president’s official residence on Tuesday. The president gave Babiš the official mission to do what he’s been trying to do since elections on October 20 and 21 - that’s to form a new government. But the political situation is increasingly looking like ANO and Babiš versus the rest.

Zeman wholeheartedly backed the ANO leader’s latest plan to sideline other political parties, which have largely rebuffed Babiš’ advances to form a coalition government. The new plan is based on putting together a minority government drawing on ANO ministers and experts and finding backing from ANO’s 78 members of parliament and outside support or toleration where it can.

Zeman justified his stand by pointing out the overwhelming victory of ANO in the recent elections, winning more than three times as many seats and almost three times the support of the second biggest party, the centre-right Civic Democrats. Babiš added that he believed he could win support based on the government programme he would put together.

And the head of state did more than offer just verbal backing. He also said he would give Babiš a free hand to form a government and become prime minister without insisting the ANO leader present him with a list of supporters names in the 200-seat lower house proving that he had an overall majority. That’s something that Zeman insisted on four years ago when the outgoing coalition government was created.

And leaders of seven out of the eight parties in the new parliament repeated their opposition to the creation of a minority Babiš government. The only lukewarm backing received so far has been from the much reduced communist party with the suggestion from its leader that in certain circumstances it might tolerate such a government. That toleration could take the form of walking out of the chamber during a vote of confidence which would lower the voting threshold a Babiš government might have to pass. 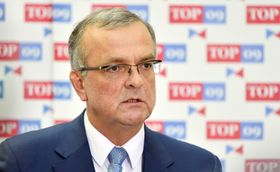 Miroslav Kalousek, photo: CTK Outright Babiš opponent, TOP 09 leader Miroslav Kalousek, offered up another option how to stop an ANO government by effectively creating a constitutional logjam. He called for parties to agree not to nominate a new speaker of the lower house, effectively preventing the new parliament from sitting. And he outlined the conditions for lifting that blockage:

"If misters Zeman and Babiš do not want to paralyse the system, then they must come up with a fairer solution. Either Mr. Babiš takes back his mandate to form a government or he must openly say where he is going to find a majority and who his silent supporters are."

That radical option failed to get wide backing and ANO’s appointee for speaker looks like being given a fairly clear run for the post after the Pirate Party said they would vote for him.