Czech President Miloš Zeman pledged his unwavering support to Israel on Monday during an appearance at the AIPAC lobbying organisation’s annual summit in Washington D.C. Mr. Zeman’s comments, in which he praised Israel as a regional beacon of democracy, come in the wake of a similar position expressed at events marking the anniversary of the Holocaust back in January. 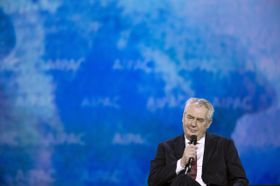 Miloš Zeman, photo: ČTK Amidst the densely packed schedule of the annual summit of the American Israel Public Affairs Committee – dubbed “This is Israel” – President Miloš Zeman spoke for little over ten minutes. It was a sit-down session with host David Horovitz in which President Zeman spoke in English. Zeman began by describing the history of cooperation between the two countries stretching back to the founding of the Jewish state:

“Let me remember only the delivery of weapons and aircraft to Israel in 1948…and to remember the Czech pilots who trained the pilots from Israel. And one of the pilots became the president of Israel – Mr. Weizmann.”

Zeman then turned to national security matters, echoing similarly – and provocatively non-politically correct – sentiments he had expressed back at a 70th anniversary memorial event marking the Holocaust back in January:

“There is a growing wave of so-called ‘international terrorism’, but I always say ‘Islamic terrorism’.

Zeman’s comments were met with repeated bursts of applause from the audience. The Czech president then reaffirmed his solidarity with Israel, once again quoting from President John F. Kennedy’s famous 1963 speech in Berlin:

“You know the famous slogan: Ich bin ein Berliner. Now we all must say ‘I am a Jew.”

Moderator Horovitz then questioned Zeman on the Czech Republic’s close ties to Israel: Miloš Zeman, photo: ČTK “Why is it that your country has such proven solidarity with Israel? What is the source of this?”

This year’s AIPAC summit has been clouded by controversy as Israeli PM Benjamin Netanyahu is set to give a controversial address to the US Congress on Iran’s nuclear ambitions, which critics have described as breaching diplomatic protocols. Similarly, no meetings were scheduled between Miloš Zeman and high-ranking U.S. officials, which analysts suggest reflects a frosty US reaction to the president’s earlier pro-Russian statements regarding the conflict in Ukraine.