A different Czech president from Miloš Zeman recently looked back at a busy 2017 and future expansion plans in Africa and the Central America for the near future. Introducing Vít Jedlička, president of the Free Republic of Liberland, the head of state of a seven kilometre square territory on the Danube river between Serbia and Croatia. 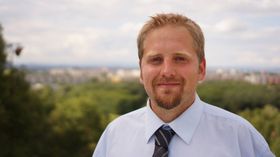 Vít Jedlička, photo: Jan Husák, CC BY-SA 4.0 Liberland was created in April 2015 on one island and one near island on the Danube between Croatia and Serbia. They are uninhabited and prone to flooding. President Jedlička says neither of the two neighbours claim the territory. But while relations with Serbia are fairly warm, those with Croatia are antagonistic with dozens of court cases pending brought by both sides.

While officially recognised by no-one, Liberland is not daunted and has seen a growing number of applications for citizenship and actual citizens. As of December, it had 480,000 applications and 150,000 eligible citizens. President Jedlička told Radio Prague recently that applications are flooding in: 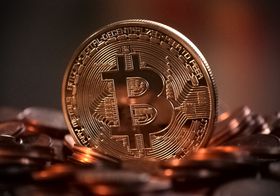 Photo: Michael Wuensch, Pixabay / CC0 The benefits of citizenship are not too clear, though the president says its always good to have a second passport. You don’t pay tax in Liberland with citizens asked to make donations instead. And that formula as well as the investments in Bitcoin and other virtual currencies had boosted Liberland’s state coffers to the equivalent of around 350,000 US dollars at the start of December. And Jedlička outlined other ambitious financial plans:

"We will use this money to actually launch a number of serious projects next year. One of them will be the issuance of our own cryptocurrency which we would like to have completely anonymous, yet also working as Liberland shares. It will be a fairly interesting concept, for example, for those that got into the world of cryptocurrencies. We want to be innovative in that sense." 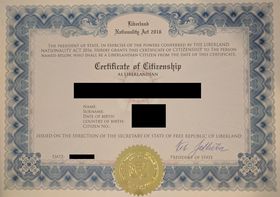 Liberland Citizenship Certificate, photo: Terrorist96, CC BY-SA 4.0 A conference boat is also in the shopping list for purchase and use off Liberland, as well as a sauna and spa.

And Liberland also has expansion plans to bring its libertarian model of government to other countries and continents. Jedlička explained the logic: "Because of this large interest, especially from the Middle East and Africa, we are considering that it would be actually healthy to bring Liberland to Africa instead of bringing all the people from the Middle East and Africa to Liberland."

In fact, plans are well advanced with the government of Somaliland, an independent if unrecognised state in East Africa, to set aside territory which Jedlička says could have something like the status of a combination of a diplomatic and free trade area. Talks have also been taking place with the government of Honduras in Central America about setting up what the Liberland president says could amount to Liberland resorts with around 90 percent autonomy from the central government. 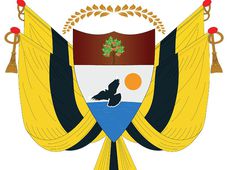 How a Czech politician and colleagues sort of founded a new country: an interview with Liberland's Vít Jedlička

A year ago this week, Czech politician Vít Jedlička and several colleagues proclaimed the world’s newest micro-nation on a seven square kilometre…

The self-proclaimed micro-state Liberland has opened its permanent representation to the Czech Republic in Prague. Its president Vít Jedlička,…

Vít Jedlička, the self-styled 'president' of Liberland (a micro-nation proclaimed by Mr Jedlička less than a year ago on…